After nine months in Australia, we headed to New Zealand where our first adventures on our Kiwi Experience bus included glowworm caves and geysers. 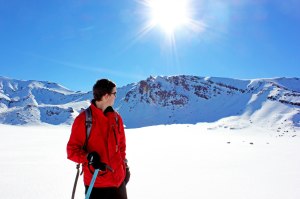 We woke up bright and early by Lake Taupo and got picked up by the Tongariro Expedition bus at 6am. On the one hour bus ride our guides Dave and Dunny kitted us out with boots, jackets, woollen pants, gaters, backpacks and gave us crampons (spikes attached to the underside of our boots). As we got off, we were also given ice axes! We were told that the toilet at the start was the only one with loo roll for the rest of the day and that the only other loo was in an hour! The Tongariro Alpine Crossing is often described as the best one-day hike in New Zealand. It is an activity offered by Kiwi Experience, but not run by them. We headed up a gradual incline to begin with, winding into the Mangatepopo Valley. It got a bit tiring but the views of Mount Ngauruhoe (Mt Doom!)to the right are spectacular. We reached Soda Springs after an hour or so, where we stopped to eat and use the toilet. We then turned right and ascended the Devil’s Staircase.

By the time we got to the top the views were beyond superb and I was feeling really good. It was tiring work but whenever we stopped I’d recover super quick and feel awesome. At this stage, it wasn’t any harder than a gym workout. Then again, I am a quarter mountain goat on my mother’s side. The next section of our trek was across South Crater at 1660m, 510m higher than base camp where we started. We stopped by a slope and Dave taught us how to use our ice axes. At Soda Springs we had split into groups of ten, and Dave was leading our group. We had to slide down the slope on our bums and then flip on our bellies, flick the bottom of our legs up and slam our ice axe into the ground, putting all our weight on it to anchor us into the ice, having been holding it correctly to begin with. Now, this slope was steeper than it looked – so steep it was a struggle to get up the hill even with cramp-ons. Sliding down the slope we picked up some serious speed and we weren’t allowed to spin over and brake until we reached the line Dave had drawn in the snow, quite far down. I picked up the technique straight away whilst Jodes never quite figured it out and just sort of fell down. The reason we did this exercise was to ensure we knew what to do if we fell down one of the treacherous steep slopes coming up.

Reaching the top of the Devil’s Staircase

Crossing the South Crater was a nice respite as it was all flat. Had the weather been bad we would have had to have turned around at this point but fortunately it was perfect all day. From the saddle between Tongariro and Ngauruhoe, we ascended the tough steep stint to Red Crater. At 1886m, it’s the highest point on the main track and the halfway point. It’s also where we stopped for lunch, a nice reward for having completed the sketchiest part of the crossing, with sheer drops either side of us. We weren’t even allowed to stop and take photos or put our bags down during the ascent to Red Crater. From the top we could see the Emerald Lakes, which were icy and hard to spot – presumably they’re more emerald in the summer. Instead of heading down to Emerald Lakes, we slid on our bums down a huge slope at a serious pace, crashing into each other at the bottom. It was a hilarious way to descend into Central Crater. We hiked across the rest of the Central Crater and descended around the northern slope of Mount Tongariro. We entered the volcanic danger zone and were told which way to evacuate should we hear any rumbling. Te Mari last erupted in August and November of last year. We zigzagged past Te Mari to the Ketetahi Hut at 1454m. The hut has huge roof damage and one of the rooms is still destroyed from rocks launched about 1.5km from Te Mari last year. That must have required unthinkable energy. 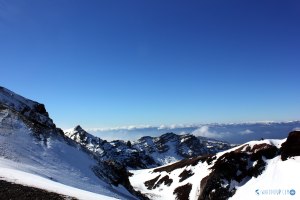 We were allowed to leave the hut in our own time, trekking down the mountain through tussock plains, then into the native forest to the end of the track. The last stage of the Ketetahi Track was over an hour long but when we got to the end we felt great. The Tongariro Expeditions crew had a can of Sprite waiting for us, and the sugar was very much appreciated! We got changed and headed back to Taupo via a gorgeous road winding past Lake Taupo. What a day. To think we hiked over an active volcanic region is incredible. It was releasing steam all day, and just a few months earlier the crossing track was diverted because it had been destroyed by the eruption. I would recommend this trip to anyone – it was unquestionably one of the best days of my life.

You can check out an awesome video of my Tongariro Crossing here.

Next time: Horse-riding in Hobbit land and crossing to the South Island

Steam across the Ketetahi Track

19 thoughts on “Crossing Mordor: The Greatest Hike of my Life”