After nine months in Australia, we headed to New Zealand where our first adventures on our Kiwi Experience bus included glowworm caves, geysers, hiking across Mordor and horse-riding in Hobbit land.

Walking along Kaiteriteri beach felt like a stroll through summer paradise. It was hard to believe we were in the depths of midwinter as we frolicked on the zipwire by the beach and drew our names in the sand.

We drove out of town on our Kiwi Experience bus, stopping unexpectedly when a member of our group Dan had to take a ridiculously long pee against a fence containing loads of deer, which all ran away. The rest of the bus watched on in a weird sort of admiration as Dan relieved himself for several minutes without stopping, prompting one of the girls to enquire out loud ‘is this some kind of joke?’ Eventually, Dan finished and we hit the road again, winding our way through the stunning Buller Gorge. The Buller River rises dramatically to flood the road every three months or so – it was much lower when we went. It’s the second fastest river in the world after the Amazon (although, on reflection, maybe Dan should be included in that list).

We stopped so folk could sign up for yet more activities offered by Kiwi Experience, although in this instance we elected to save our dollars for upcoming highlights Franz Josef and Queenstown. Instead we had a quick go on a tyre swing, which never stops being fun however old you are, does it? 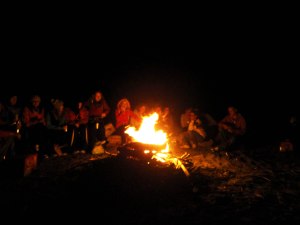 Our bus rocked up at the picturesque town of Westport and that evening our awesome driver Mangee set up a bonfire for us by the beach. We had a great evening cooking marshmallows by the fire.

The next morning we went for a walk along clifftops on the way out of Westport. It was a miserable day but we got to see some seals. We drove on a bit and stopped at Pancake Rocks, walking around the amazing layered formations, where the soft sediment has eroded leaving only harder rock. Our drive further along the incredible coastline felt much like the Great Ocean Road in Australia or the Pacific Coast Highway in California. Our next stop was Greymouth, home to a third of the West Coast’s population and a big mining community. 29 miners were killed in a tragic explosion there in 2010.

I made a video of this incredible part of the world, which can be found here. 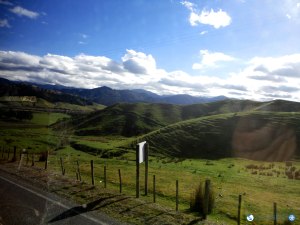 We spent an hour and a half shopping for our party that night, a fancy dress party organised by Kiwi Experience at the ‘Poo Pub’ in Lake Mahinapua. It is a long standing Kiwi Experience tradition and every Kiwi Experience bus stops there for one night for a party – no one other than Kiwi Experience is allowed to stay at the Poo Pub. Polaroids adorn the walls of group shots from every Kiwi Experience bus from decades gone by; it’s quite a special place. A few weeks after my trip there, I heard from an old friend who had since been on a Kiwi bus to the Poo Pub and found my photo on the wall with my group, which was pretty awesome! Anyway, the theme for our fancy dress party was anything beginning with the letter ‘P’. I spent $2 on string and got some free card to wear like a human billboard that I would later draw on to create a ‘profile page’ for our legendary bus driver Mangee. Meanwhile Jodes got a ‘prisoner’ outfit.

After rocking up at the Poo Pub, we went for a walk to the nearby lake in one direction and the beach in the other. Then it was time to start work on the outfit. After an epic steak dinner cooked by mange and the staff, I took a photo of mange so Jodes could draw his profile picture for me on the huge piece of card I’d be wearing around my neck. It was pretty hilarious by the time we were done, containing all his catchphrases as ‘updates’ on his profile page. On the back, I got everyone to ‘sign Mangee’s wall’. It got a good reception when we went to the bar and there were some great outfits going on. Mangee loved his profile page and we cracked out my by now infamous Kiwi Experience board game a couple of times, too. All in all, a good night.

The next day we left the Poo Pub in the rain but feeling good. We stopped at a town with a population of 2! It’s a café/museum and I tried a possum pie, which was, er… not so great. Meanwhile, Mangee was getting everyone to vote for the best costume and I won! The prize was a free canyon swing in Queenstown worth a couple of hundred bucks. This was fantastic, obviously, except now it kind of meant I had to actually do the Canyon Swing, which sounded pretty terrifying. More on that in a couple of blogs time…

Next time: Heli-hiking across an ice glacier in Franz Josef…

With Mangee our driver, dressed as his FB page. This costume won me a canyon swing! 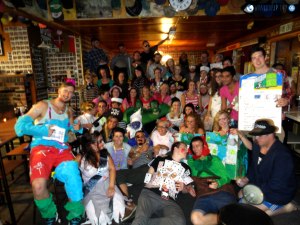 Party at the Poo Pub!

12 thoughts on “Partying at Lake Mahinapua”