After a year travelling the East Coast of Australia, picking oranges and working in Melbourne, it was time for one last trip to our favourite Australian city.

We woke at 3am on July 21st 2013, our last day in Melbourne and boarded a coach at 4am to Melbourne Avalon Aiport, which was more middle of nowhere than it was Melbourne. My aunty picked us up from Sydney airport and drove us to G’Day Bronte, our favourite breakfast spot from our last visit. Sadly, the club sandwich defeated me this time, which induced much mockery from the others. We drove to Bondi Beach and Noah’s backpackers’ hostel to drop off our bags. Astonishingly, the guy at the desk remembered us from over nine months ago! We got dropped at the Opera House and it was even more stunning than I had remembered. A quote in the gift shop summed it up best: “the Sun never knew how brilliantly it shone until its light reflected off this building”. 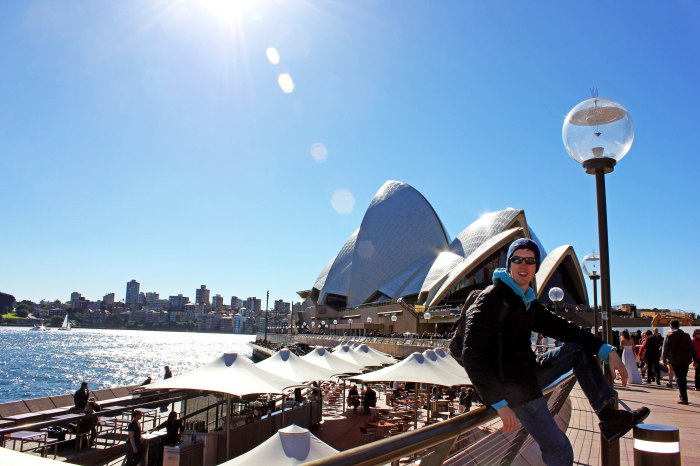 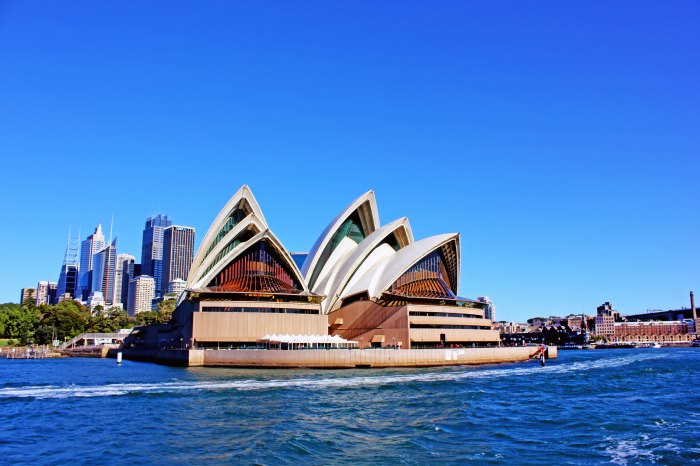 We walked around Circular Quay, enjoying the techno didgeridoo buskers and then caught the ferry to Manly, a journey we weren’t too bothered about doing again but were instantly glad we had. The views of the Harbour Bridge and Opera House are simply sensational. The Opera House is made of ‘sails’ which are sections of spheres, each one glistening magnificently in the winter sunshine.

The ferry took us to one of our favourite spots in the world, Manly, where we met old friends and had fish and chips (you haven’t found true contentment until you have had fish and chips on Manly beach – heaven indeed). During a walk to Shelley Beach, the beauty of the northern Sydney beaches became almost overwhelming. On a gorgeous day, I cannot think of anywhere nicer in the world. 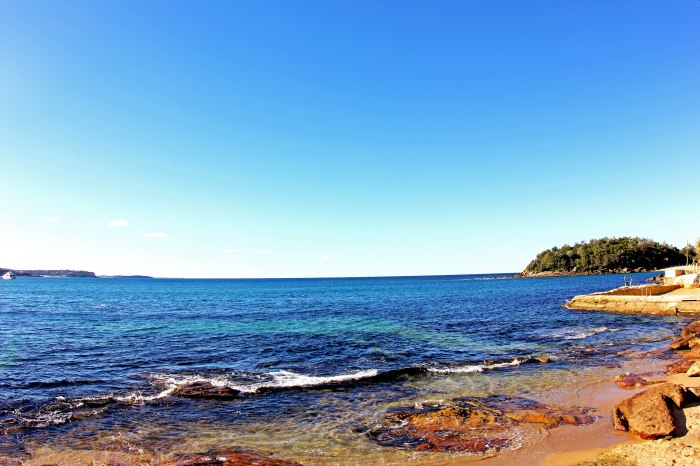 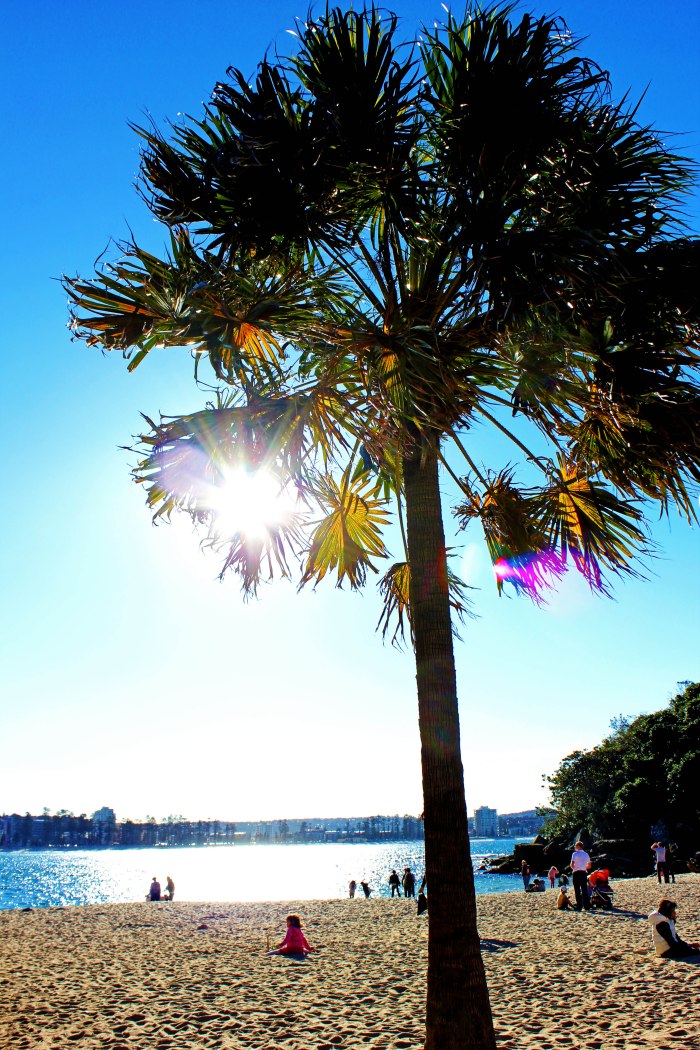 The following day we set off at 6am for the Blue Mountains. It was a chilly day and when we stopped at Leura for a full English I dared to try hot chocolate with cinnamon and chilli. Boy did that have a kick!

Our first real stop was the Three Sisters – a breath-taking lookout unsurprisingly consisting of three rocks jutting out in a line. The Mountains looked really blue and the weather was very sunny and clear, even though it was freezing! We missed out the scenic railway (the steepest in the world, incidentally) as we only had one day to get around, but I’d like to head back someday. 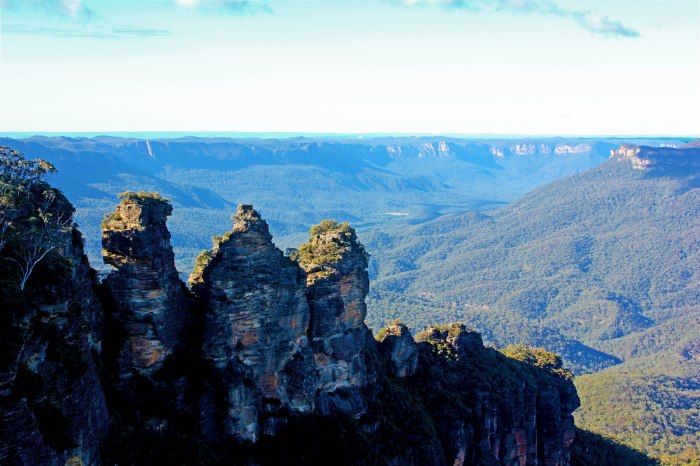 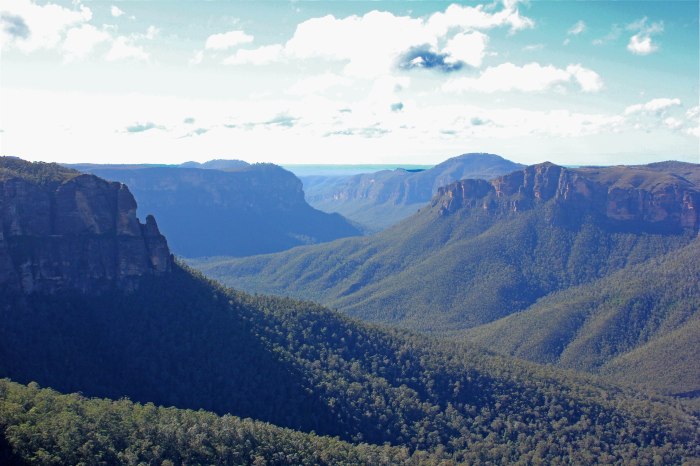 We drove on via Katoomba to Bathurst and drove the legendary circuit. The narrow twists and turns as you ascend Mount Panorama are incredible. I would love to one day see the Bathurst 1000 race – I remember watching highlights of the 1998 Super Touring race and being inspired by the stunning venue and two-driver touring car endurance format. We looked round the National Motor Racing Museum shop and headed back to Sydney. The full moon looked gorgeous as we drove past Sydney harbour. 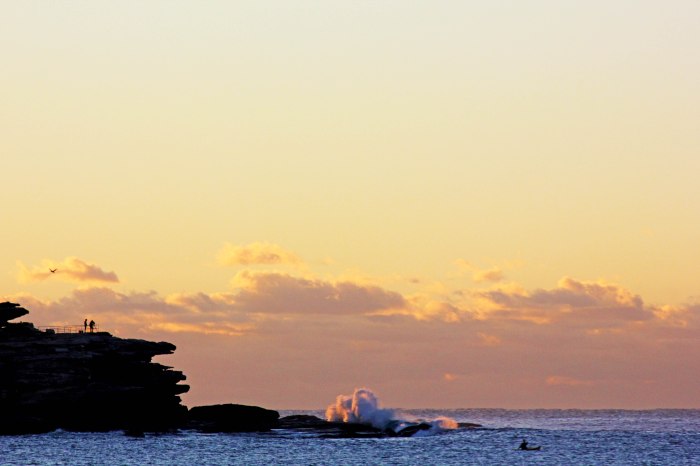 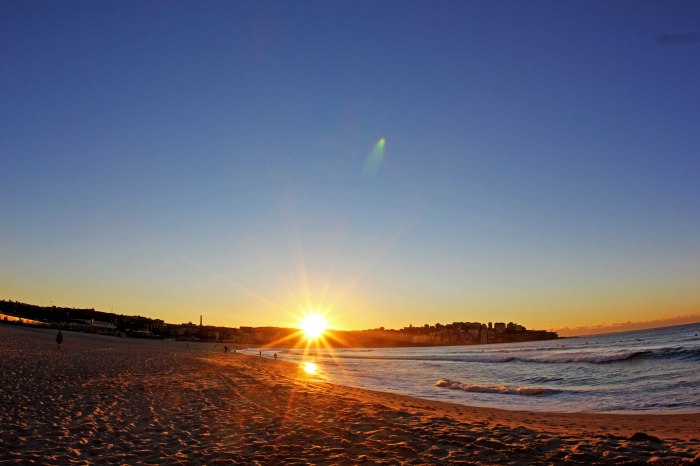 At dawn the next day we wandered onto Bondi Beach for a wonderful sunrise. We grabbed a fruit muesli yoghurt breakfast from Bondi Massive and took the bus to Circular Quay, where we purchased tickets for a three hour whale watching tour. I was excited to go, having not been on a humpback whale watching tour since my trip to Hervey Bay ten years previously. We got a good spot at the back of the boat and I filmed a wicked timelapse as we cruised past the Opera House and Harbour Bridge. Out of the harbour, past where the ferry goes to Manly, we reached open water and headed south. Moving to a spot on the front deck, we quickly found a couple of southern humpback whales – a mother and a yielding (last year’s calf) – and tracked them from 100-200m away. The whales migrate north to mate in the Coral Sea between April and August before returning south via the East Australian Current (y’know, the one from Finding Nemo). As it was July, the mating whales had already passed Sydney which is why we saw the stragglers, the mother and yielding.

Over the tannoy we were informed that the whales go on deep dives but usually surface every 4-5 minutes. We travelled north with the humpbacks and after an eight minute patch of no sightings, Jodes took the opportunity to go to the toilet. Whilst she was away, the whales not only slapped their tails mightily on the ocean surface but breach simultaneously, launching their whole bodies in the air and smashing back down into the water with the most spectacular of splashes. Apparently a double breach is very rare so we were lucky. I was too zoomed in with my camera at the time to capture it and it was over in a second but at least I saw it with my eyes, as did Jodes who had emerged from the toilet just in time! 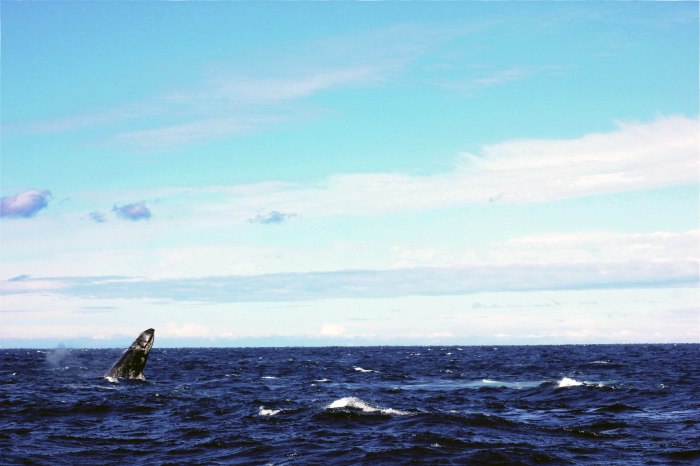 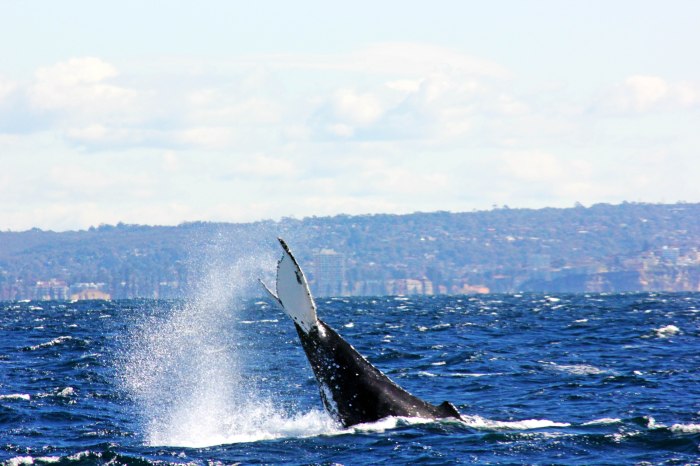 The whales swam under us and re-emerged on the port side, blowing spray some more. On the way back to the harbour, we looked at the pictures and it turned out I didn’t miss them at all and got two phenomenal shots – even the crew were impressed by my one of the mother mid leap and the yielding landing on the water. 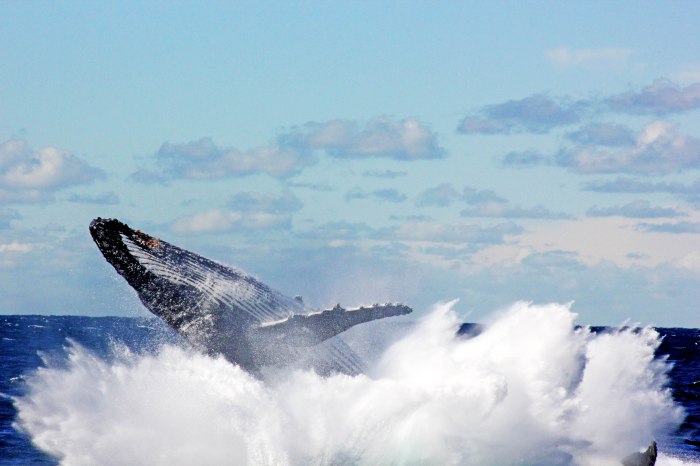 We grabbed a cup of tea at the Opera Bar overlooking what is surely the best harbour view in the world, and wandered back through the CBD. That evening we spent our last night in Sydney at the Sydney Theatre Company bar in Walsh Harbour (Wharf 2). It’s a stunning location overlooking the Harbour Bridge – a hipster venue with gorgeous food (the lamb shank was delicious). It was the perfect way to end our year in Australia, and yet again we left Sydney just wanting to come back for more.

The next day, however, new adventures awaited in a brand new country. We were headed for Auckland and the most action-packed three weeks of our lives…