After nine months in Australia, we headed to New Zealand where our adventures on our Kiwi Experience bus included glowworm caves, geysers, hiking across Mordor, horse-riding in Hobbit land and partying at the Poo Pub.

View from the helicopter

We stopped at the beautiful Lake Mapourika, ten minutes outside of Franz Josef, and skimmed stones. There were ominous clouds hovering over the mountains when we reached Franz Josef, obscuring the glaciers from sight. We checked in to the glacier helihike centre but did not pay as the weather forecast for the next day, when we planned to ascend the glacier by helicopter to hike it, was rather iffy. Everyone was super excited to get up the glacier but we knew our chances were 50% at best due to the inclement conditions. That afternoon we checked into the YHA and I crucially beat Jodie at New Zealand style Monopoly.

We headed down to the Franz Josef Glacier Tours centre at 8am the next morning, fingers crossed hoping to see more than just the town while we were there (you could say we were after Franz with benefits, but that’s a terrible pun so I won’t use it). We waited a bit before getting kitted up and ready to go, only to hear that the weather had indeed cancelled our trip – just as we had gotten our hopes up! Maybe it was karma for that terrible pun…

The helicopter departs the glacier

The good news was that it wasn’t officially cancelled, but just delayed for three hours, so despite us only being in town for the day we still had a chance. We all camped out in the café next door (I had a wicked hot choccy) and we annoyed the staff at the Glacier Tours centre by playing the children’s games ‘Tomato Ketchup’ and ‘Duck Duck Goose’ which involved us running in circles around their foyer.

Incredibly, the cloud and rain cleared and we got the green light at 10:45. We were so excited. We were all set to go when we were told we would have to wait a little longer – until 11:45 – to fly. Eventually the time came and we crossed over the road to the helipad for my first ever time in a helicopter! I was on the first helicopter with the lads Will, Dan, Matt and Louis whilst Jodes and the girls waited for the next chopper. It was amazing how quickly we were strapped in and up in the air for a mindblowing aerial view of the rainforest and mountains – it was a bit like the opening titles of I’m a Celebrity. I realised I was fulfilling a lifelong ambition to film out of a helicopter (I’m a video nerd, check out the rest of my site for heaps of video content).

We landed on the glacier and got our crampons on. By the time Jodie’s helicopter arrived I had found a person-sized hole in the ice and was sat in it as if it were a racing car. I was sort of gleefully excited to be up there scurrying about on a glacier like a kid allowed to play in the woods on their own for the first time.

We hiked  up into the glacier with Ti, our guide, hacking out steps for us with his ice axe. For the record, ice axes are exactly what you imagine and every bit as cool (pun intended). Fairly early on, Kirsty fell in a pool of ice water whilst attempting to pose for a photo at one of the amazing ice formations. I soon started clambering, running and climbing all over the ice which panicked Jodes.

It was so awesome – some of the formations were just gorgeous; none more breath-taking than the ‘Holy Grail’. All across New Zealand people had told us that that year there was a unique ice formation atop the Franz Josef glacier which even experts who had hiked glaciers for decades previously were flocking to see as it was so unlike anything else seen before. Water and wind had carved out a perfect tunnel you could walk through – a stunning, mesmerising display of nature’s beauty. To walk through it was to experience awe-inspiring majesty. When we walked through, however, we experienced something else: fear. Halfway through it we heard two large explosion-like crashes. Looking to Ti for reassurance, his only response was ‘what was that? What was that?’ He told us to hold fire while he investigated…

The routes were narrow and tricky to climb in places

It turned out two large blocks of ice from the slowly melting walls of the ‘Holy Grail’ had collapsed spectacularly onto the floor below up ahead. A second guide arrived to smash the rest of it down, preventing any sudden collapse once we got there. You see, glaciers are ever changing, moving one metre a day downhill – the Holy Grail was only ever going to exist for 2-3 months maximum, and the entire landscape changes every month or so. Hence Ti never gets bored on his job – imagine going into the office each day to see that everything had moved by one metre, old furniture had come crashing down, new formations had appeared and the very structure of the building evolved into something completely new every few weeks.

As we headed back the weather took a turn for the worse with more rain coming in, so we fast tracked for the icy helipad, slipping and sliding and scrambling to dangerous ledges for wicked photo opportunities as we did so. I sat at the front in the cockpit of the helicopter for the return journey so I could film our flight through the rain. Despite the streaming raindrops, it looked sensational.

Later that day we met up with the others at the Hot Pools downtown, which we got access to for free with the purchase of our glacier hike. They are gorgeous, relaxing outdoor pools that are perfect for a post-glacier hike wind-down. There is one at a moderate 36 degrees, one at a warm 38 degrees and one at a toasty 40 degrees, which is too hot to stay in for long I tell you!

It got dark as we lay under canopy, chilling in the pools and reflecting on our amazing adventures in New Zealand so far. It felt like we had achieved far more than just two weeks’ worth of activities, and yet there was still potentially the best to come. Jodes and I went for dinner at The Landing, a wonderful restaurant with memorabilia from New Zealand’s most historic moments as a nation on the walls. The staff were really friendly and we had an epic burger and nachos. It had been an amazing day.

Next time: Queenstown, Arrowtown and Wanaka 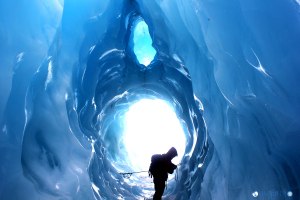 Into the Holy Grail 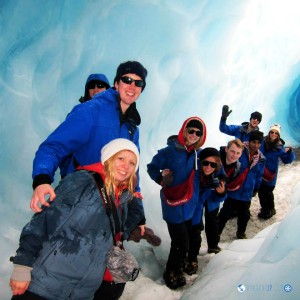 In the middle of the glacier