There are some situations humans are just not evolved to cope with. Antarctic winds, tornadoes and prolonged space travel spring to mind. I’d like to add flinging oneself off the biggest canyon in the world possible to that list. And yet somehow, somehow, here I was. Toes edging towards the platform, lying to my girlfriend that everything was going to be okay, trying to ignore the fact that I’d never been so scared in my life…

After nine months in Australia, we headed to New Zealand where our adventures on our Kiwi Experience bus included glowworm caves, geysers, hiking across Mordor, horse-riding in Hobbit land, partying at the Poo Pub, heli-hiking a glacier and climbing a mountain in Queenstown.

The day of the canyon swing I had won finally arrived. After a nice lie in we went to the travel shop in the hostel reception to pay for our snowboarding trip at Cardrona the following day. We wandered about town and used Peter Pan’s Wifi like we did all those times in Melbourne, before going to the Canyon Swing store and getting signed up. We got driven by minibus to Shotover Canyon and watched terrifying videos of the canyon jump en route, including the boys from the Australian AFL Footy Show taking the jump.

We got there and everyone got harnessed up. By this point I was getting very nervous. It is, after all, the biggest cliff jump in the world… 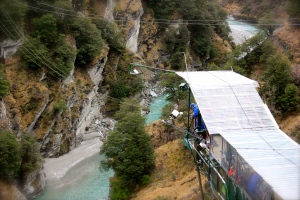 Will and Charlotte went first, then Alice, then Katy and Kirsty. I waited to see if Jodes was able to go with me (she has back issues so cannot bungee jump, for instance) and in the meantime the others started having second goes. Eventually Jodes was told that she could do it so we decided to go tandem. I was grateful to not do it alone but also nervous Jodes would bail at the lat minute or worse, get hurt. I can’t remember having been more scared in my life than at this point.

We got harnessed up and edged towards the jumping platform. I was feeling rather terrified especially when I looked down. Jodes started saying that she couldn’t do it but I did that lie thing and said it would be fine. The guys told us to look up at the camera for our photo and we struggled to respond to their general chit chat as nerves took control. A voice in my head said ‘why are you doing this again? This isn’t big. Or cool. Or clever. You don’t like this sort of thing. You didn’t know it but you now have a fear of heights. This is INSANE. Turn back.’ 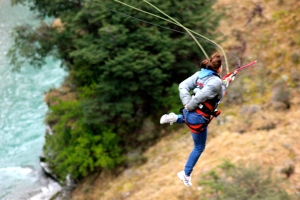 Heart in your mouth time!

It was too late to listen to that stupid voice and soon enough the dude was counting us down: ‘3… 2… 1…’ and WHOOSH! We were freefalling 109 metres, Jodes screaming alongside me. The rush was incredible as we plunged into the vast canyon, sharp rocks and trees speeding by us on either side whilst cold, blue rushing water below us was staring up from the river accelerating fast towards us. We swung across the middle of the canyon so there was no jerk like in bungee jumping, then swung back a few times before slowly being winched up. I saw some animals on the mountainside on the way up which turned out to be goats but spent most of the agonising five minute ascension nervously listening to the winches clicking above us, convinced the whole mechanism was about to break and send us perilously back into the canyon of doom below.

Despite trying to put on a bad boy devil-may-care attitude, I couldn’t have been happier to finally get my feet back on firm ground. We walked back up and bought the DVD of our jump which was highly entertaining! We drove back to town and in the minibus watched more canyon footage of hilarious bloopers which they thankfully did not show us on the way there!

We warmed up and got our heartbeats back down with a well-earned famous FergBurger. They were as delicious as the hype suggested, too! I had a ‘Sweet Bambi’ venison burger, which I would highly recommend. FergBurger’s burgers are surely the best in the world.

There is an option to jump upside down, if you’re brave enough… 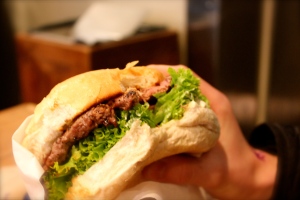 So here it is – the video footage of our thrilling Canyon Swing:

Next time: Snowboarding in the Cardrona Mountains

10 thoughts on “Canyon Swinging in Queenstown”