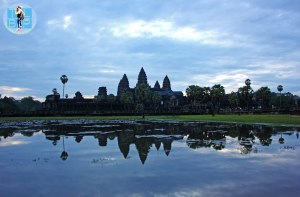 It really looks like the trees are deliberately making a statement to all human empires and endeavours: ‘we will be here, mighty and strong long after your attempts of immortality have faltered and crumbled’. It’s just one of many astonishing images that make up the Temples of Angkor. In any other city just one of these mighty temples would be world famous; here there are hundreds…

After nine months in Australia and three weeks in New Zealand, it was time to venture out of the first world for the first time. We hit up Bangkok and Koh Chang in Thailand before heading off to Cambodia to see Koh Kong, Koh Rong, Sihanoukville and Siem Reap.

What a day. We arose at 4:20 in the morning and got picked up by our tuk tuk driver who fro $15 we had rented for the day, through the hostel. We stopped at the Main Entrance and Admissions to purchase tickets; our photo was taken and printed on our tickets – I can’t say I looked that photogenic at 4:45am!

We drove to Angkor Wat and when we arrived it was still pitch black and we needed a flashlight to walk over the broken path. We crossed a moat into the walled city and across the grass to the pond across from the main temple, in perfect position for the iconic sunrise shot of Angkor Wat. Angkor Wat was built for King Suriyavarman II in the 12th century as his state temple and capital city. As the best-preserved temple, Angkor Wat is the only one to have remained a significant religious centre since its foundation – it was first a Hindu temple dedicated to Vishnu, the Buddhist. The Temple has become a symbol of Cambodia, appearing on its national flag, and it is the country’s prime attraction for visitors. The clouds obscured much of the sun’s rise but the slow diffusion from darkness through dawn framed against the ancient skyline held in spiritual reverence for generations was an experience worth getting up for.

Once it was properly daylight we headed into the temple itself to try to beat the rush whilst many tourists retreated for breakfast. Inside the temple was the abs-relief of the historical gallery, a Bayeux Tapestry-style depiction of Khmer events and beliefs. We were given candles to place in a bucket and then were asked for a donation which we snuck away from on the grounds that this was ridiculous.

After a pancake breakfast next to the temple where each stall bizarrely had names like ‘James Bond’ (stall 007!), ‘Lady Gaga’ and ‘David Beckham’, we headed down the road to Angkor Thom, a larger complex comprising several cities within a city. We passed a couple of elephants carrying people along the way. Our first Angkor Thom temple was Bayon, an impressive structure to say the least. It was built in the late 12th or early 13th century as the official state temple of the Mahayana Buddhist King Jayavarman VII. It features a multitude of serene and massive stone faces on many towers that at first seem like pareidolia (the phenomenon of seeing patterns where there are none, like a face in the clouds) but are in fact deliberately constructed faces looking down on you from all sides. Interestingly, the eyes were always blank, which have been shown to be part of the face most likely to intimidate people into following rules. People behave themselves if a pair of eyes is ‘watching them’, even if the eyes aren’t real!

Chilling out in the heat

We crossed a bridge to Baphuon next, which was built by Udayadityavarman II. Baphuon had an awful lot of steps to climb and next we walked to the Terrace of Elephants and the last couple of temple ruins.

We hopped back on the tuk tuk to Chau Say Therada, out of Angkor Thom now and across the Siem Reap River. Both Chau Say and Ta Keo were impressive temples but by now they all started to seem a bit same-y. Not so much Ta Prohm, the next temple on our list. Unlike most Angkorian temples, Ta Prohm has been left in much the same condition in which ti was discovered. Vast tree roots grow out of the ruins and the sight of the 1186 temple of King Jayavarman VII being reclaimed by nature is a tremendous one indeed. Incidentally, this is where Tomb Raider was filmed, but Angelina Jodie and Indiana Jon moved on to Banteay Kdei, a pretty temple set back a bit from the road and thus less busy with tourists (although just as busy with Cambodian children relentlessly pestering us to buy postcards, bracelets etc. My patience with sales people has never been so tested; some of these kids looked no older than four or five, it was sad in a way.)

Sras Srang, our last stop was not a temple but a large picturesque pond. By now it was swelteringly hot and we were templed out after eight hours so headed back to our Siem Reap hostel to shower. We had lunch, swam in the pool, had dinner and booked flights from Hanoi, Vietnam to Phuket, Thailand for two and a half weeks later. We also walked into Siem Reap town and booked a cheap bus for the next day’s ride back to Phnom Penh. Meanwhile the entire hostel team of cleaning ladies had decided to fix our bed that we didn’t even know was broken, which was a bizarre conversation given the language barrier.

Where Lara Croft was

Next time: Phnom Penh and The Killing Fields.

13 thoughts on “The Temples of Angkor”

There was an error retrieving images from Instagram. An attempt will be remade in a few minutes.