The mass graves were chilling even though it was hard to envision the now peaceful green fields as a place of such suffering and death. The survivor stories helped bring it to life and it was hard not to feel anger and sadness at the insanity of Pol Pot’s paranoid and ruthless attempts to create a pure agrarian self-sufficient society. People were worked to death by Angkor in the slave labour camps, living off 1-2 bowls of rice soup during upwards of 12 hours a day of back-breaking labour in the fields; often the number of grains of rice per person could be counted on one’s hands…

After nine months in Australia and three weeks in New Zealand, it was time to venture out of the first world for the first time. We hit up Bangkok and Koh Chang in Thailand before heading off to Cambodia to see Koh Kong, Koh Rong, Sihanoukville, Siem Reap and the Temples of Angkor.

We were up at 6:30 for breakfast in Siem Reap before getting picked up by tuk tuk and taken to the bus station. The bus took us back down south to Phnom Penh past a multitude of waterlogged fields (well it was the wet season, after all). When we got off the bus Phnom Penh lived up to its reputation as the worst place for being accosted by tuk tuk drivers wanting your business. We were positively caressed by them as they tried to carry our bags for us. The day previous an equally persistent child selling fruit at the Temples of Angkor shouted to Jodie: ‘Pineapple, Lady? Pineapple, Lady?’ Since then I and been referring to Jodes by her new fruity superhero name: Pineapple Lady.

A reminder of the horrors

We walked to the hostel via a lunch at ‘Mama’s’ and that evening watched ‘The Killing Fields’, an excellent 1980s film about the Khmer Rouge regime and war in Cambodia, in preparation for our visits to the Killing Fields and S21 Prison the next day.

A remork-tuk picked us up from our hostel after breakfast the next day. It was a half hour journey across a hot bustling lively Phnom Penh centre to the Killing Fields at the Choeng Ek Genocidal Centre. Choeng Ek is the most well known of over 300 killing fields throughout Cambodia under Pol Pot’s Democratic Kampuchea regime. The Khmer Rouge are estimated to have murdered around two million people (a quarter of the population) between 1975 and 1979. There was an excellent audio tour of the Killing Fields, which began with an explanation of the Khmer Rouge’s march into Phnom Penh on 17th April 1975. The first stop on the tour was the ruck stop, where prisoners were brought from Phnom Penh in the dark of night to be executed, tricked into thinking they were relocating to a new house so they remained calm. Blindfolded and with their hands tied behind their backs, one can only imagine their feelings.

Pol Pot’s aim was to start again at ‘Year Zero’ and eliminate education, religion, urban life (all cities were evacuated immediately) and to instantly triple rice production, an impossible task. Disease and famine spread through the labour camps in what were already hellish conditions.

The most shocking and moving part of the tour was ‘The Killing Tree’, a large tree trunk upon which babies’ heads were smashed. Discoverers of Choeung Ek found hair and brains stuck to the bark. Former Prison Director Duch was brought to Choeung Ek during his trial to help him remember the atrocities he committed; at the point of the tour where he reached The Killing Tree, he broke down and wept.

The horror is never far away as you wander The Killing Fields. 166 victims are buried in a mass grave without heads; victims’ clothing is displayed in a glass box atop which sit teeth and part of a skull that was recently uncovered. Bones rise to the surface pretty much every time it rains and every few months they are collected and displayed.

Towards the end of the tour is ‘Magic Tree’, which was used as a loudspeaker to play music to drown out the screams from the executions. They did not want those awaiting execution to know what was happening or be able to anticipate their fate, you see. They even poured chemicals on the corpse to cover up the stench of decaying flesh, although this served the double purpose of killing any survivors. Bullets were not ‘wasted’ on these poor, poor people. Oh no, instead a whole array of agricultural tools were used to bludgeon, spear or smash prisoners to death. Tree bark was also used to slit throats. Prisoners included any ‘intellectuals’ seen as a threat, including anyone who wore glasses or spoke a foreign language, any former city dwellers, any known associates of the former government and a whole heap of people tortured into signing false and absurd confessions. If one person was killed, their whole family was also murdered, in case any returned to seek revenge. Of course, the torturers and executors acted out of fear of being murdered themselves. ‘To kill grass you must pull out all the roots’ was one of the Khmer Rouge’s mottos. Another was ‘Better to accidentally kill an innocent than accidentally spare an enemy’.

The real injustice is that the murderers continued to represent the victims for a further 12 years at the UN – until as recently as 1991! And Pol Pot died aged 82 in the late nineties, escaping trial. I could write about post-1979 Cambodia and the Khmer Rouge all day but I encourage you to look it up yourself – it certainly is fascinating if chilling reading. 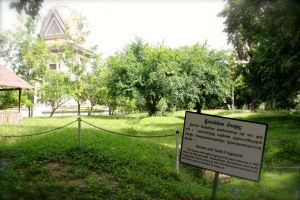 The last stop on the tour was the magnificent Memorial Stupa, housing skulls, bones and clothing of the victims displayed on 17 levels. The small museum across the courtyard was also interesting.

That afternoon, we went to the Tuol Sleng S-21 Genocide Museum, where the horror of Cambodia’s history became almost too much to bear. I’ll describe that in my next blog.