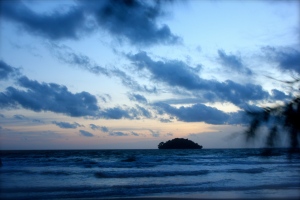 In our tuk-tuk-remork heading to the Vietnamese Consulate, our driver veered from the right side of the road (unlike Thailand, Australia and New Zealand, Cambodians drive on the right), across the central reservation and began driving towards the oncoming traffic on the left. I presumed he must have simply tired of conventional road policy and braced myself in reaction to the rate at which our distance to oncoming traffic was diminishing. Amidst my panic I noticed a woman waiting by the side of the road. Perhaps we were crossing the street to collect her? Alas, the rational part of my brain was still just calm enough to observe that with two passengers, two rucksacks and two large backpacks, there was no way even the most cash-hungry optimistic of remark drivers could squeeze another person onboard. This was it then, I thought, my life’s going to end in Sihanoukville, Cambodia. This thought occurred just as the remork raced past the woman waiting only to suddenly pull in on the side of the road a little further up anyway. This was most confusing. Perhaps we had crashed with one of the oncoming remorks and this was some sort of tuk-tuk purgatory. I allowed myself to look up and saw where we were. The Vietnamese Consulate. Not only were we alive, we had made it to where we wanted to go. We had simply crossed the street to pull over to the consulate, a possibility I never even ‘tuk’ into consideration… 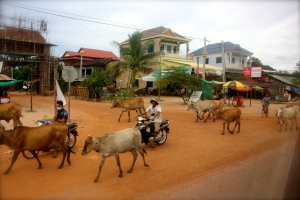 After nine months in Australia and three weeks in New Zealand, it was time to venture out of the first world for the first time. We hit up Bangkok and Koh Chang before heading off to the Koh Kong region and Koh Rong island in Cambodia.

We checked out of Coco’s on Koh Rong island and boarded the ferry back to the mainland. We grabbed a pulled pork sandwich at a funky western restaurants alled Led Zephyr and at 2pm grabbed a Moto Tuk-Tuk to the Vietnamese Consulate to sort out our visa for entering the country later in the week. For $60 we sorted our visa for Vietnam in 15 minutes, which was great given how arduous the process can reportedly be. Apparently many people are put off entering the country altogether by the visa hassles, which is a real shame.

Anyway, we were glad to have that done and our mototuk driver took us to Otres Beach and Footprints, where we would be staying the night. If going to Otres Beach, beware that there are actually two beaches: Otres 1 and Otres 2. We almost got scammed by the taxi fare because we hadn’t specified which we needed to go to.

The drive out of Sihanoukville up north

Over a nice Asian curry dinner I finally got some phone signal for the first time in days and found out I and got the job I was applying for back in the UK. Amazingly, I had been called about it in Melbourne, Australia, told about the interview in Wellington, New Zealand, had the interview in Christchurch, New Zealand and was told I’d got the job in Sihanoukville, Cambodia. Given the amount of sim cards I was juggling across those countries it was no wonder they had a hard time getting hold of me!

Next time: travelling the length of Cambodia to Siem Reap…