Say what you want about Vietnam, but it ain’t dull. Saigon is like an assault on the senses: noises from all directions, odd smells, unique cuisine, vibrant colours and people grabbing you trying to sell you things. But after a day in Saigon I was starting to get under its skin a bit whilst it got under mine; the more I learnt about this fascinating country, the more I wanted to learn. I was hooked on this magnificent, beautiful, rich country…

After nine months in Australia and three weeks in New Zealand, it was time to venture out of the first world for the first time. We hit up Bangkok and Koh Chang in Thailand before heading off to Cambodia to see Koh Kong, Koh Rong, Sihanoukville, Siem Reap, the Temples of Angkor, the Killing Fields and the S-21 Prison. In Vietnam, we had arrived in Saigon and checked out the War Remnants Museum. 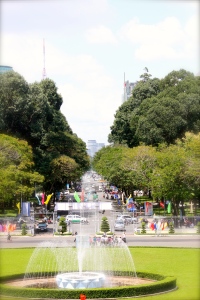 View from the Palace

We walked into the Re-Unification Palace at 1pm for just 30,000 dong (around $1.50 in U.S. dollars), past its beautiful lawns. Inside, most of the rooms were exactly as they ere in 1975. The President of the ROV’s (Republic of Vietnam) meeting room, office, map room, bedroom, gambling room, cinema, basement bunkers and radio rooms were in the same condition as 40 years ago. The radio equipment looked like a physics lesson from the 1970s. There was also a helicopter on the roof and the points marked on the roof where two bombs were dropped by the North Vietnamese Army.

The evacuation of Saigon was the biggest helicopter evacuation in history.  The code to secretly alert the people of Saigon to an evacuation was a radio broadcast: ‘The temperature in Saigon is 112 degrees and rising’, followed by a playing of ‘I’m Dreaming of a White Christmas’. Japanese reporters apparently worried they would not recognise the song and had to have it sung to them! There were so many helicopters arriving at ships out at sea that some choppers had to literally be pushed overboard to make room for more helicopters landing; it was chaos.

We headed back to the Ben Thanh market and had lunch – I and the famous Vietnamese ‘Pho’, a kind of noodle soup. Wandering round the market was crazier than any market I’ve been to – people were touching us constantly asking what we were looking for and if they could help. Hands from all sides were grabbing us. Still, we managed to haggle some Gucci sunglasses for 200,000 dong (around $10 U.S.) 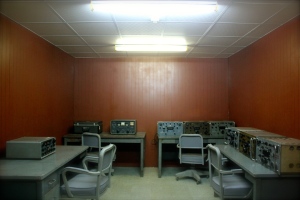 Inside the Radio Room

We tried heading down a new lane for dinner that night and ended up at a place called Alley Cats. Two random men came in from the street and tried to massage me while I waited for my chicken and pineapple skewers, which was odd. The skewers came on a grill so I could cook them myself, which was pretty sweet! Meanwhile women carrying huge four foot high stacks of books and DVDs on the back of motorbikes tried to sell us their swag. I was quite enjoying the madness of Vietnam so far but the best was yet to come.

The streets of Saigon