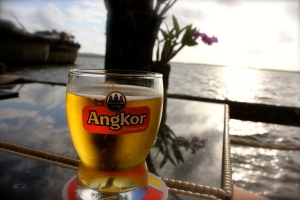 Crossing borders in South East Asia is a bit different from say, driving into Belgium from France. For a start, there’s no gendarmes or Booze cruisers. In fact you feel a bit more like an asylum seeker at Calais: it doesn’t feel very official, you might have to bribe someone and it could all go wrong at any minute.

After nine months in Australia and three weeks in New Zealand, it was time to venture out of the first world for the first time. We hit up Bangkok and Koh Chang before heading off to Cambodia.

Once the ferry from Koh Chang had got us back on the mainland, we got another ‘taxi’ to Trat, then a minibus to the Cambodian border at Cham team. We had to walk across a sort of no-man’s-land between Thailand and Cambodia and got through without letting anyone carry our bags for us (it’s a bit of a scam – the guys there want to do it so they can demand tips). We got our visas and stamps and the taxi guy offered to take us to Koh Kong for 400 Thai Baht. Now confusingly, ‘Koh’ means ‘island’ in Thai, but it means something else in Cambodia. So Koh Chang in Thailand is an island and Koh Kong in Cambodia is not. However, Koh Rong, the Cambodian island we aimed to visit the next day, happens to be an island anyway! 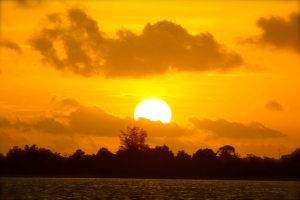 I digress. We had read that the taxi fare should be way less than the 400 Thai Baht this dude was offering us. We turned down him and loads of other taxi drivers until we got one for 220  Baht including high ware fur, a recently introduced fee needed to get across the epic bridge to Koh Kong.

Lush fields streamed by the wide highway which was curiously filled by motorbikes. The tuk-tuk we were on wasn’t actually a tuk-tuk but a ‘remork’ – a trailer on the back of a motorbike (traditional Thai Tuk-Tuks are one vehicle without a trailer). We checked into Paddy’s Guesthouse (no shoes allowed upstairs!) and walked to the riverfront for dinner at a beautiful restaurant.

Back in our almost-treehouse-like room I was relaxing, excited to be in Cambodia, my fifteenth country. That was until we woke up to A MOUSE!! Miraculously, we survived the night like brave heroes, despite several dreams of being pieces of Cambodian cheddar just waiting to be sniffed out.

The next day, we had a bus to catch to Sihanoukville before a bus to the paradise island of Koh Rong…