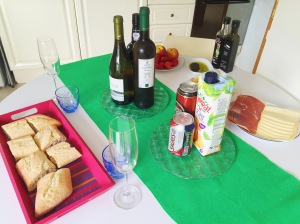 There are some places in life whose history is almost too bonkers to get your head around. I found the Cascais and Estoril region west of Lisbon to be one of those places…

Having stayed the night before our trip at The Regency Hotel – a lovely inn near Crawley – we flew south with beautiful views over Weymouth and Portland on a day where the ocean and the sky melted into one infinite blue pool. The bus from Lisbon airport dropped us by the Casa do Sodré station where we took a half hour train ride to Estoril.

HOME OF JAMES BOND AND NAZIS 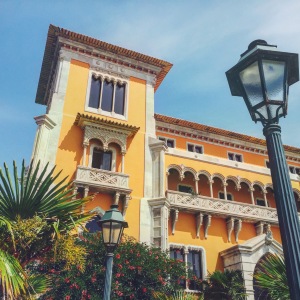 Even the station felt exciting and historic. The large capital letters ‘Monte Estoril’ on the side of the building flanked by sharp black train lines hanging against a deep blue sky spoke of a time not so long ago when spies from both sides of the war lived in uncomfortable harmony with their enemies in Estoril. Indeed, Ian Fleming’s inspiration for the original James Bond novel Casino Royale is believed to have been Estoril Casino, a place we visited late at night after a fair few wines. It’s perhaps not as modern and swanky as Vegas casinos but has a bygone charm that fits well with the old-school Bond lifestyle. Amazingly, whilst London and Berlin turned off the lights for the Blitz, Lisbon and in particular Estoril was a rocking party hosting Allies and Nazis alike where almost everyone was a spy of some sort. 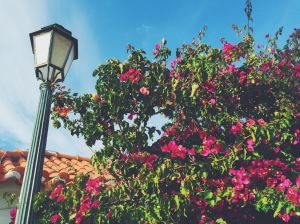 We walked up the hill through cobbled  streets lined with beautiful purple trees against a pastel blue sky, past bright bing oblong buildings that looked like those pink wafer biscuits to our apartment where our AirBnB host Maria was waiting. The apartment was light, airy, spacious and homely inside – exactly what you would want from a Mediterranean apartment. The pool was beyond delightful and perfect for frolicking in – until I booted a small rugby ball across the pool and over the fence, but a kind passer by chucked it back up from the street way below! We walked to the local minimart in Estoril and bought meats, cheeses, bread, olives, peaches, strawberries, Sagres Portuguese beer, wine and of course port and had a lovely evening meal back at the apartment. 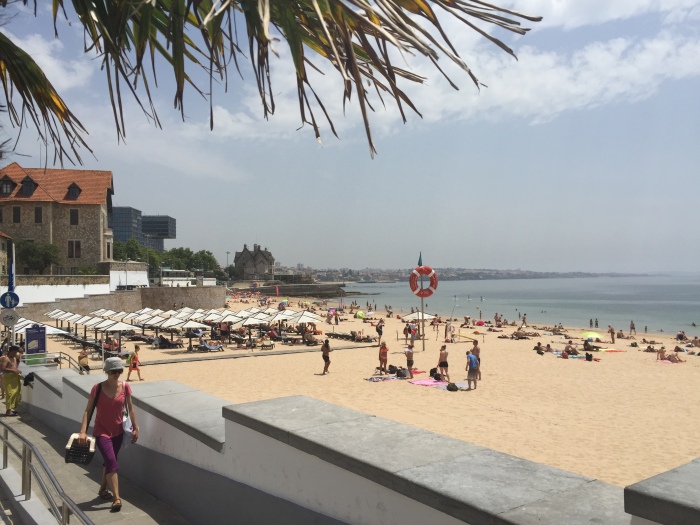 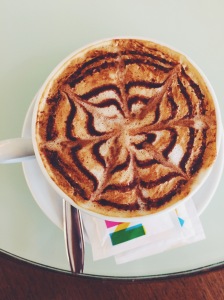 The next morning – and every morning thereafter – for breakfast we had dois cappuccinos and tasty ham and cream cheese pastries from the wonderful Saboia Confeitaria opposite our apartment, before strolling down into Estoril’s seafront. Estoril beach was a sandy haven, already packed with throngs of locals and tourists by the time we got there. The super-clear turquoise waters licking the brown rocks were chilly but calm and the sun was hot as soon as you got out the shade. The ocean glistened and sparkled as waves lapped the idyllic shoreline and topless locals of all levels of attractiveness strolled along the cobbled promenade. Estoril is one of those places like Melbourne where there are outdoor gym apparatus and fitness bars and you feel like if you lived there long enough you would get sucked into being fit and healthy. Like Sydney’s Bondi and Bronte beaches, this place had iceberg pools filled by the sea for you to swim in. 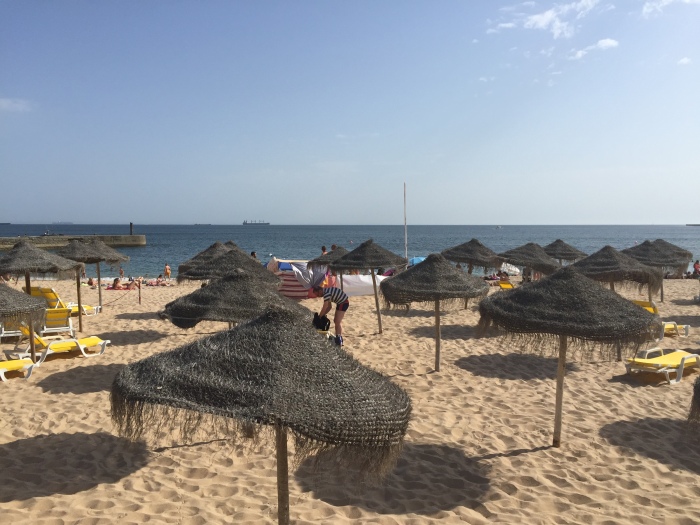 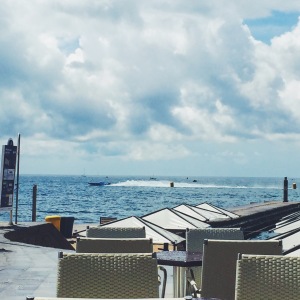 On the final day before we had to go into Lisbon to catch our flight, we heard a buzzing like turbocharged mosquitos from our apartment. The noise got louder as we strolled to the seafront and completely by accident we ended up spending a wonderful few hours shoreside watching qualifying for the third round of the XCAT Powerboat Racing Championship, before listening online to the start of the Le Mans 24 Hours.

Further round the bay lay Cascais with buildings alternating between brightly pastel coloured flamboyant architecture and rustic crumbling dinosaurs whose graffiti even oozed character and history, all interspaced with palm trees that grew wherever they fancied. The streets were colourful and lively with vendors pushing their products and restaurants on tourists but not in a too-unfriendly way like perhaps Saigon. Even the signs denoting the street names were beautifully ornate and charming. The harbour at this end of the bay was even more pleasant with a smattering of boats dotted about the water whilst buskers entertained lunchers at the waterfront cafes.

EATING IN ESTORIL AND CASCAIS 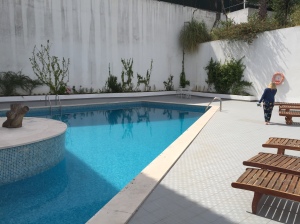 There’s no shortage of great eateries along this stretch of the coast. Cascas on the beach served a fantastic seafood curry and dessert plate on our last night, whilst Santini did some of the best ice cream I have ever had. A few doors down from Cascas we had we superb seafood linguini and at Cervejaria Marisqueira we had great service from friendly waiters. Throughout the trip, my Portuguese improved thanks to waiters and shopkeepers humouring my attempts to learn. 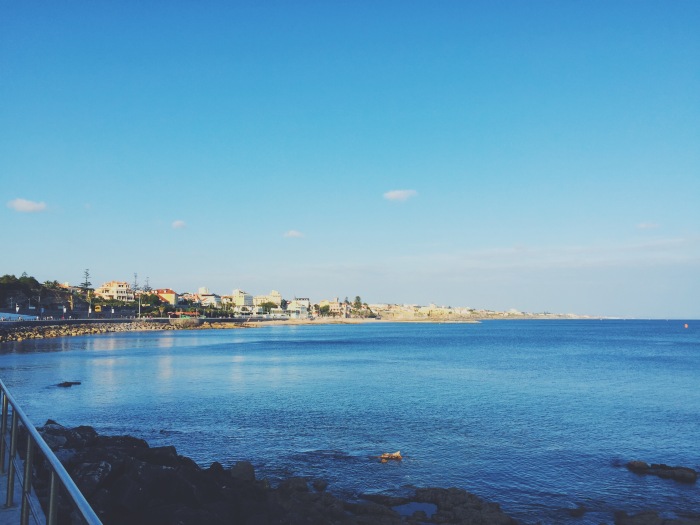 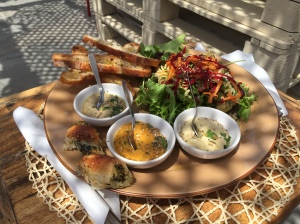 Above the terracotta quilt lay a rooftop terrace called House of Wonders where we had a cracking mezze of hummus, pasta and breads on that first full day. The tables were made out of pallets, there was just enough shade to stay cool but enjoy the sun and the freshly squeezed juices were sublime. After a splash and a sunbathe in the pool at our apartment, we returned to a Cascais bathed in golden evening sunlight, somehow making the place look even more delightful. We had dinner in the touristy but still-quaint Largo Luis de Camões. At Duke, I chose a selection of delicious Brazilian meats (I was keen to practise my Portuguese language and indulge in Brazilian culture ahead of my move to Rio later this year) which I was given a hotplate to cook on. 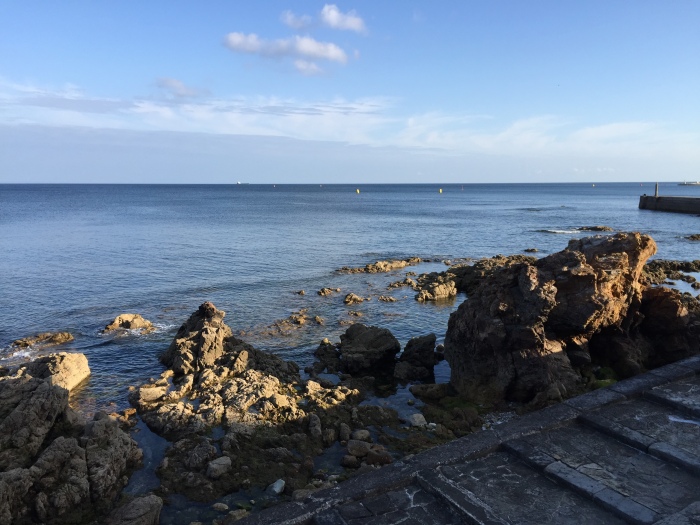 I have two travelling traditions: I buy a shot glass in every country I visit with name and/or flag of the country on it, and I sample the local beers and pick a favourite. The Portuguese winning cerveja was Sagres. 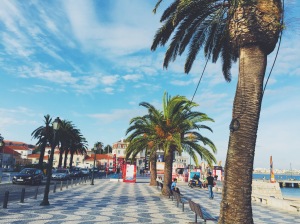 I’ve also got a new tradition. As I mentioned in one of my Barcelona blogs I am trying to read novels set in places before I visit them. Having read Dan Brown’s Angels and Demons just before visiting Rome nine years ago, The Da Vinci Code before visiting Paris and doing a Da Vinci Code tour there the same year, Bill Bryson’s Down Under before visiting Australia for a year in 2012/13 and The Shadow of the Wind just before visiting Barcelona, I read A Small Death in Lisbon by Robert Wilson before visiting Lisbon, Cascais and Estoril. Set partly during World War II when Allies and Nazis lived alongside each other in the one part of Europe with the lights still on and a party going on, I found it a fascinating and gripping insight into the incredible history of that part of the Iberian peninsula. The Nazis and Allies were after wolfram, a material which was naturally abundant in the Lisbon region and used for armouring tanks and weapons. The consequences of those times rumbled on right through to the 1974 coup and beyond. 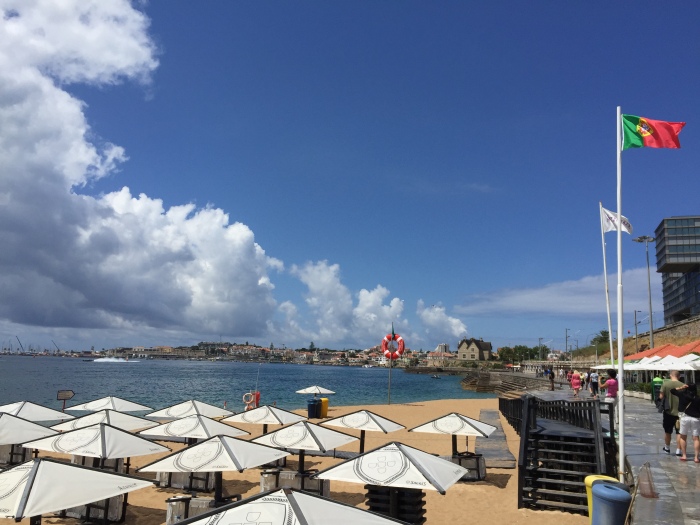 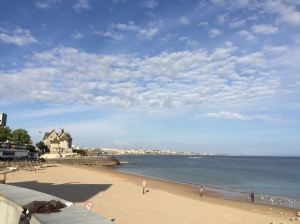 Sitting on the jetty that night, we watched the sun melt away and paint the clouds yellow, making for a beautiful reflection in the ocean’s waters which chuckled away beneath us. It was then that we realised we were in no hurry to get into Lisbon itself, as we had fallen hopelessly in love with Estoril and Cascais.

One thought on “Cascais and Estoril – where Bond and Nazis roamed”