For the last 45 minutes I’ve been clambering over sketchy rocks in what is starting to feel like a fruitless attempt to reach a beach I’m now doubting the existence of. My legs are scratched and I’ve lost count of the times I’ve slipped on the slime into a crab-infested rockpool. But then… there it is. Dazzling waves lapping on immaculate white sands that stretch across a perfect bay occupied by… no one. Except us. We’ve just found our own private piece of paradise and I’m speechless…

After nine months in Australia and three weeks in New Zealand, it was time to venture out of the first world for the first time. We hit up Bangkok and Koh Chang before heading off to the Koh Kong region in Cambodia.

We woke up for breakfast at Paddy’s Guesthouse in Koh Kong before Paddy arranged a moped lift for us to the bus station for our 8:15 to Sihanoukville. As we dodged the traffic, my moped driver lost his hat! But still, it is amazing that in a poverty-stricken country that has suffered the Khmer Rouge, civil war and remains the 15th most corrupt nation (ahead of Nigeria, for God’s sake) in the 2008 Corruption Perceptions Index issued by Transparency International, the public transport is still light-years ahead of East Sussex.

An hour into the bus journey, the whole bus stopped because Jodes needed a wee. The drivers who barely spoke english found it hilarious. Small bladders is a kind of a humour that translates across all languages. Later, we stopped for lunch at a sort of small market come service station. I bought meat and noodles. Or so I thought. The noodles were actually ginger and the meat was the worst I have ever tasted. It was mostly bone, I mean I wouldn’t feed that stuff to a dog. Thinking about it, maybe it was dog. I suspect roadkill of some kind; I’ll never complain about western service stations again.

We got in to Sihanoukville at 1pm. The Moto-Tuk driver got us to the boat ticket box before we got a minibus to the boat. The next two and a half hours was spent on a wobbly old ‘ferry’ with no seats. It got pretty boring but Koh Rong was worth it. We checked into a cute bungalow on stilts at a place called Coco’s.

The beach to ourselves

We had dinner and drinks and walked along the beach a little. The toilets in Cambodia are a bit primitive. Toilet roll has to go in the bin and you flush by pouring water from an adjacent bucket down the loo. But this really was paradise, and you wouldn’t want it any other way. There are talks of Koh Rong being westernised and fully developed with hotels and a helipad. I hope that doesn’t happen; the fact that you have to get a rickety old boat across choppy waves for two and a half hours to get there and the fact that the facilities are a bit basic make it all seem like one of the last genuine unspoilt pieces of paradise left in the world. Long may it last.

We slept well even without a fan – it was very hot and tropical in August when we went. We grabbed breakfast then clambered over rocks for 45 minutes to reach a stunning pristine white beach we had seen from the boat the day before. The clambering was well worth it – we spent the whole morning swimming and sunbathing on effectively our own private pristine beach. The water was so wonderfully warm it was a joy just to lie in it and float (although it was rather salty). To this day when I’m having a stressful day and I want to relax, I put myself back to being on that perfect beach. 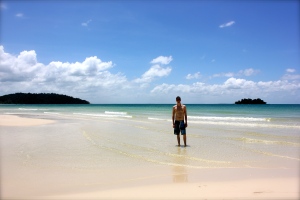 It was getting seriously hot so we headed back over the rocks, much quicker on the way back now we knew what we were doing. We showered to cool off back in our room before heading back down to Coco’s on the beachfront for dinner and cocktails under a beautiful nearly full moon. Looking back, I think life was about as perfect as it gets at that moment.

Next time: our first week in Asia ends in Sihanoukville on a Vietnamese visa quest…