8 years in 1 picture! I’ve been writing a sentence a week – a diary of sorts. If you’ve known me since the start of ’06 you’ll probably understand some part of this if you zoom in. Even if you don’t know me, I hope you enjoy it as a very personal art project.

Below are close-up pictures from each year with descriptions, including my new to-be-filled-in edition for 2014. 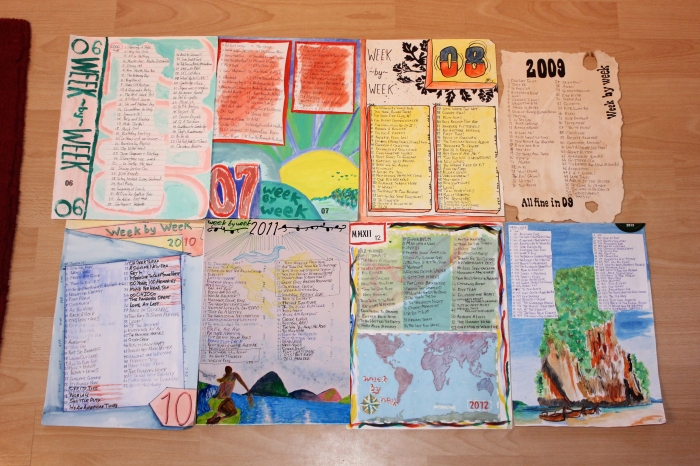 The first eight years of the project. Scroll down for the 2014 edition… 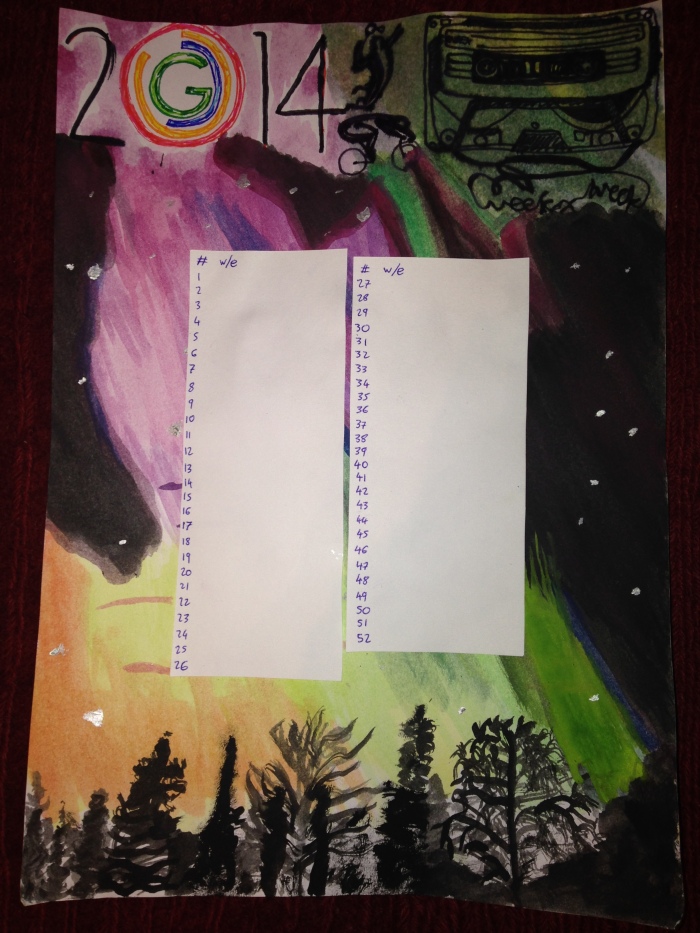 The brand new blank 2014 edition of my ‘week by week’ series where I write a sentence for each week. 2014’s theme is the Northern Lights (something I would love to see) and also combines the Glasgow 2014 Commonwealth Games logo (where I work) and the pictograms for track cycling and badminton, the two sports taking place at my venue for the Games this summer. Scroll down for previous year’s ‘week by week’ projects. 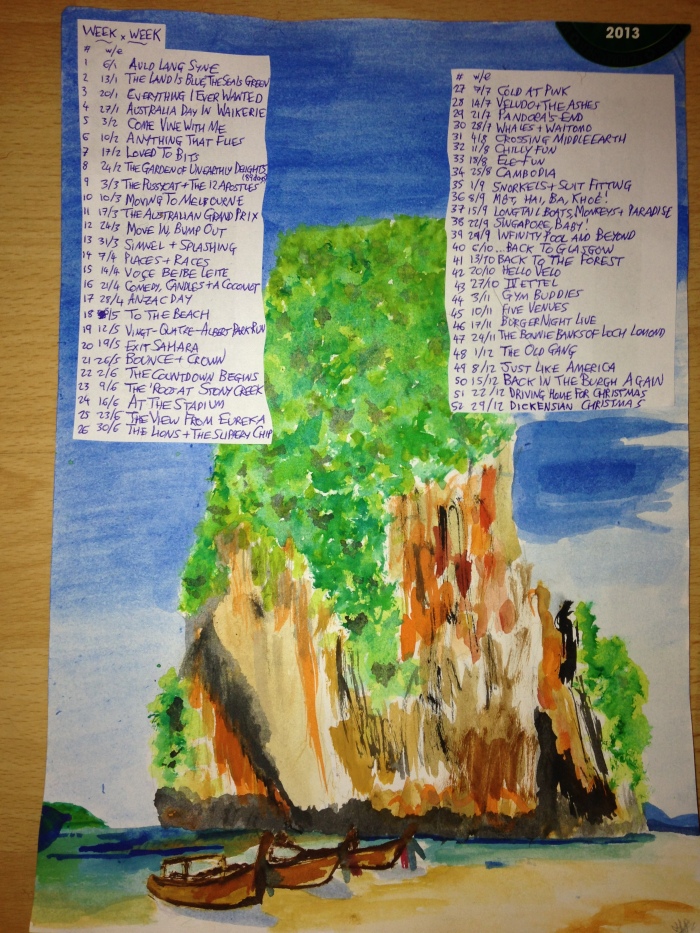 I love the 2013 theme. It depicts Railay Beach in Krabi, Thailand. I eventually visited this stunning place in September of that year. 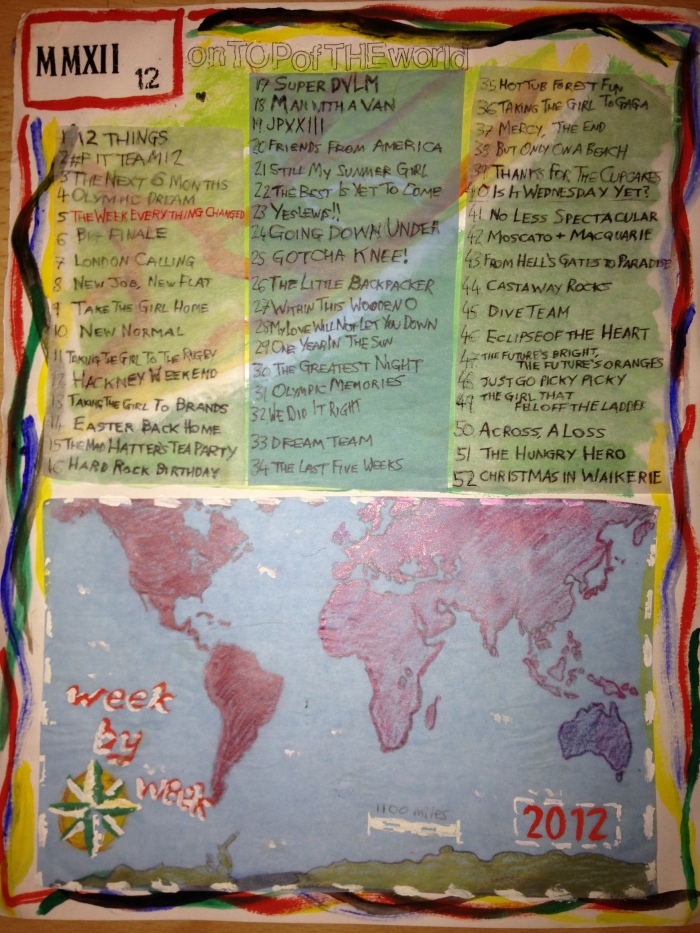 2012 was again very travel-themed and includes the colours of the Olympic rings snaked around its border. When I made this I had no clue that I would spend seven incredible months working at the London 2012 Olympic Games that year 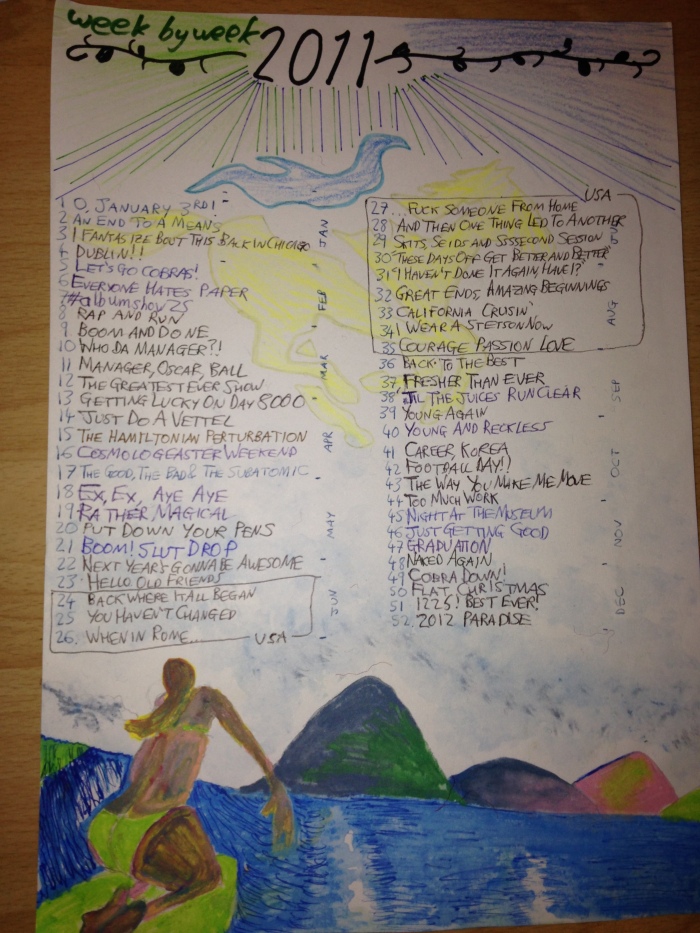 2011’s theme features surfing and horseriding, both of which I achieved in America that year 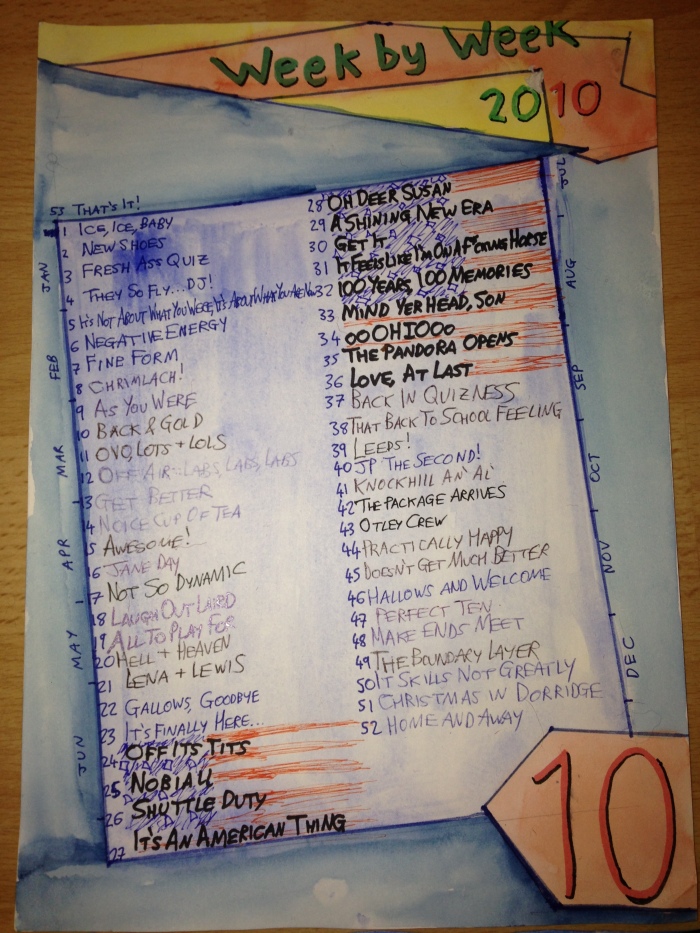 2010’s theme is funky and the weeks when I was in America are highlighted by stars and stripes. After 2010, the ‘week by week’ themes took on a very travel-y theme! 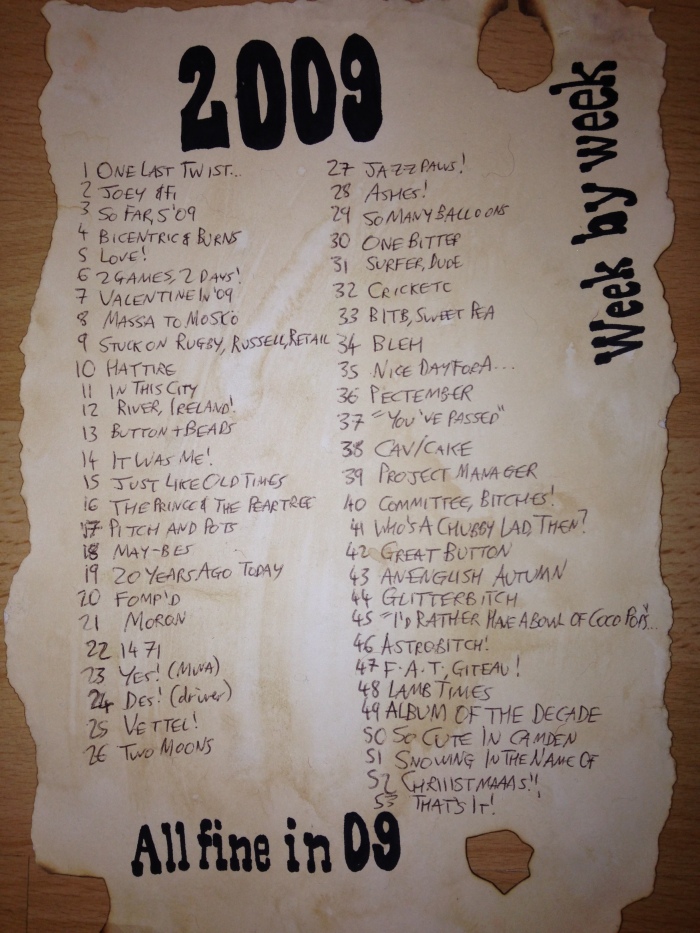 A retro, wild-west theme for 2009. I actually stained the paper with a teabag for this one. Old school art rocks. 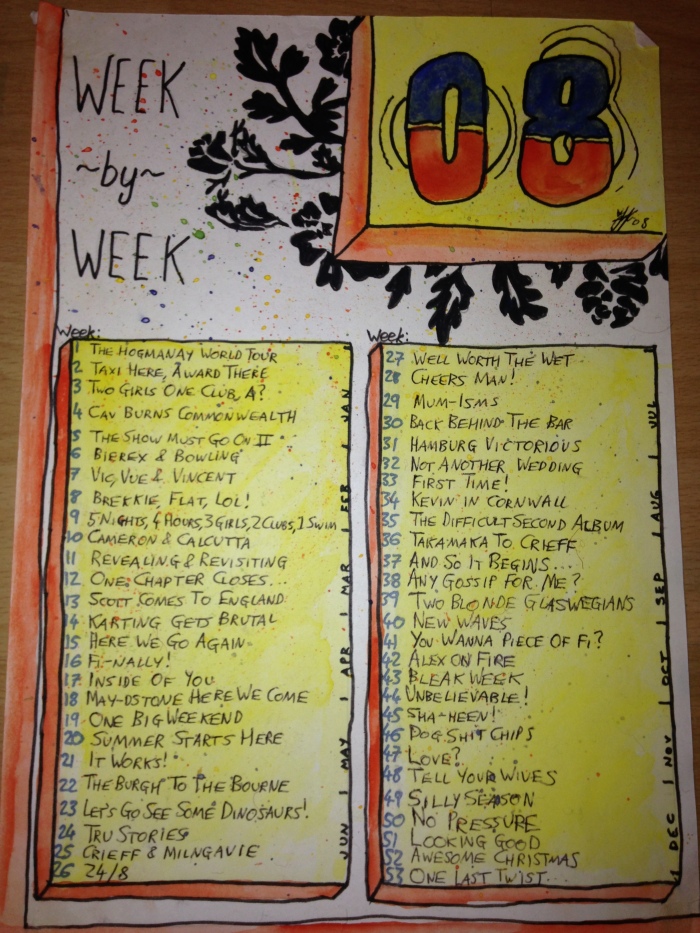 I love 2008’s design. It’s subtle yet bold and I even sprayed the paper with multicoloured dots by flicking the paintbrush across the page with different colours. The result is striking and it’s still one of my faves. 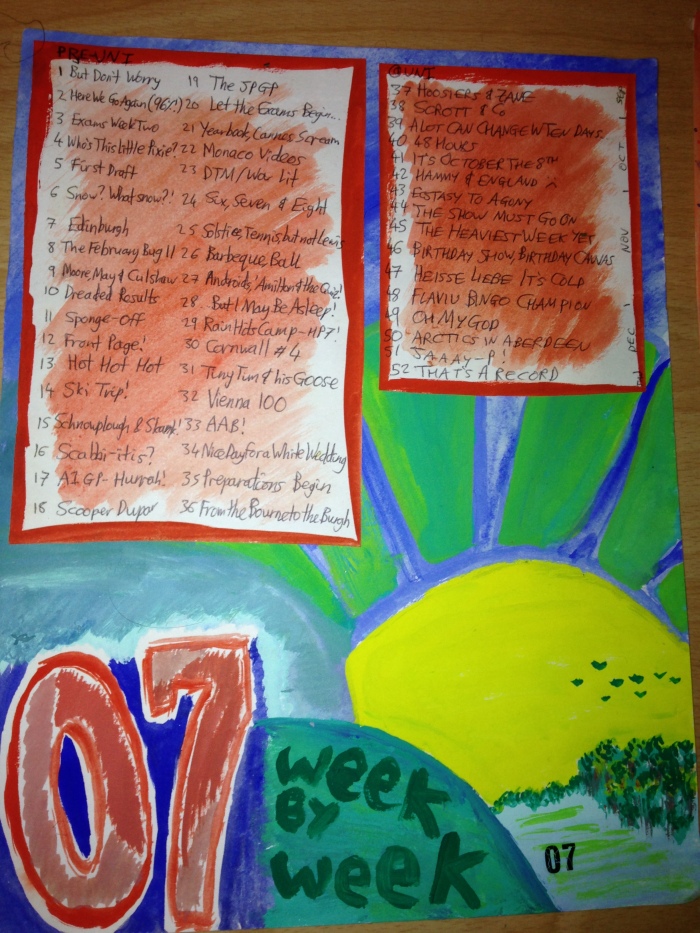 My desgins were much simpler and less intricate pre-2008. I knew I wanted blue and red as my theme and I kept it simple. My designs have definitely improved since! 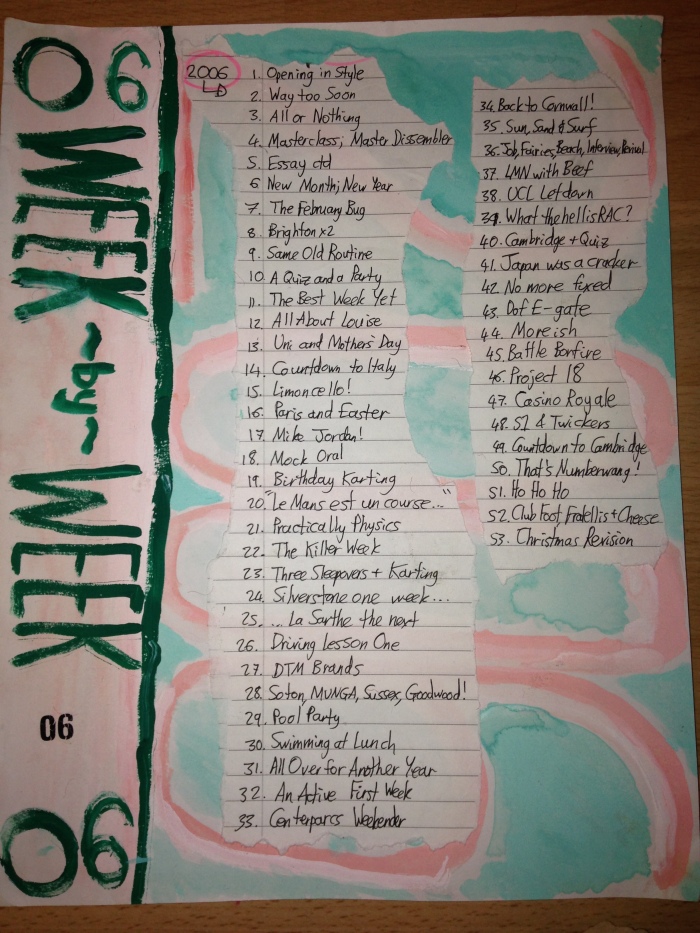 The original iconic pink and green scheme from ’06. I like the torn edges and big numbers written sideways in the background. It does the job and is marginally better than ’07 but I much prefer my more contemporary ones! 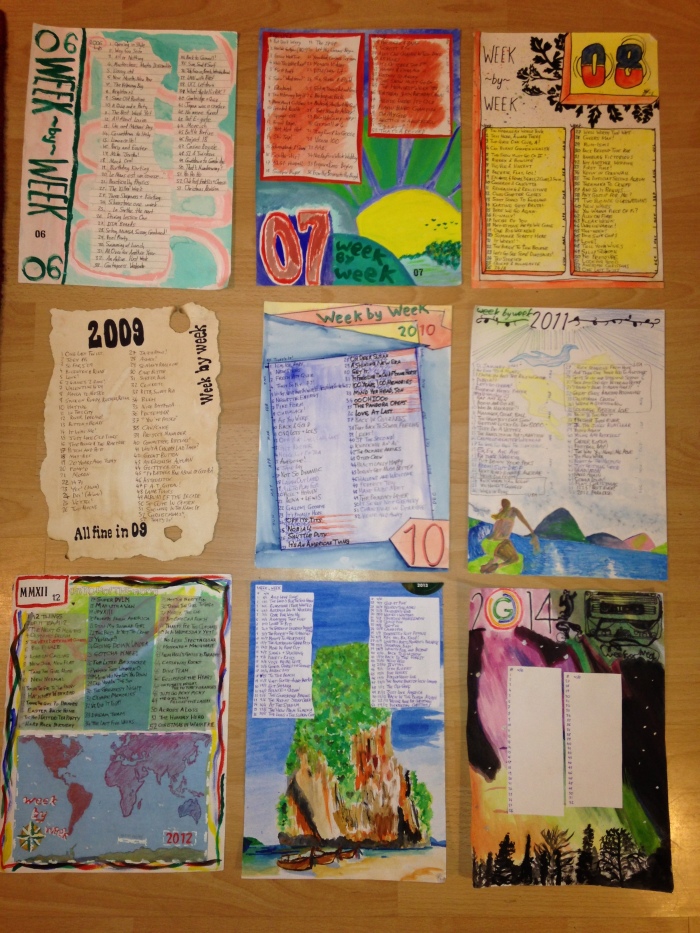 All nine years in one shot! Basically my whole life in a photo, which is pretty cool. Looking forward to filling in 2014’s edition!