The last week of my life has been a blur of energy, colour and mayhem. In a manner similar to how my old hometown of Edinburgh transforms into the world’s biggest arts festival every August, each February my current hometown of Rio de Janeiro becomes quite literally the world’s biggest party. It is every bit as bonkers, intense and debauch as you can imagine; it is something everybody should do once and needs to be seen to be believed. Here’s my tips for if you’re planning a trip next year.

For those new to Carnaval, the event is broken down into ‘blocos’, essentially street parties which pop up all around the city. There are hundreds and hundreds. Some of them will have about 30 people in attendance, then you’ll pop to the toilet and return to see the crowd has swelled to 2,000. Other blocos have half a million people waiting to party half an hour before it starts. Each one is unique: some are static, some move down the streets of a particular neighbourhood where the Samba band playing is based. Essentially the blocos are big street parties and last 2-3 hours on average. They start at all times of day and night – my favourite was the Carmelitas de Santa Teresa, which began at 7am and wound its way down the stunning hillside of a region I had not previously explored. Another favourite was the Sargento Pimenta bloco in Flamengo which played Beatles songs in the style of Samba! Check out the full list of blocos here.

Prepare for so much Samba

One of the reasons the Beatles themed bloco was so much fun was because us Gringoes (the term used to describe non-Rio residents or non-Cariocas) could actually sing along to the words. For Brazilians, Samba is the music they have grown up loving and they all tell me that Carnaval is far and away the highlight of their year. Culturally, the importance of Samba is colossal – my advice is embrace it, try and learn some of the words and let a little of the joie de vivre of the locals rub off on you – your Carnaval will be all the richer an experience for it.

Get to the Sambodromo once

I ended my Carnaval experience in the best way possible, with a visit to the iconic 13-block Sambodromo for the Desfile das Campeãs or ‘Champions’ Parade’. The winning Samba schools are invited back to parade again on the final Saturday and the atmosphere was like nothing I’ve ever experienced. The colours and the sounds of Carnaval were amped up to another level; it was a night that assaulted the senses in the best possible way. The parades go on until 5am and the costumes and floats are even bigger and more impressive and elaborate than they look on TV.  There are several nights during the week when you can also go to the Sambodromo – take your pick and buy tickets here.

If you’re a dude, dress as a chick. If you’re a chick, where as little as you like. And whoever you are, glitter is a must. Other than that, anything goes – think Hallowe’en parties taken to the extreme. If you ever wanted to get creative in the costume department, now is the time to do it.

Yes, Rio is probably the most beautiful city in the world. And yes, the people do tend do be rather stunning, but in most cases an awful lot of those people will be in the same place samba-ing for a long time in temperatures frequently pushing 40 degrees celsius. Expect to sweat a lot. Which brings me to my next tip…

If you’re a pasty gringo like me, dehydration is something to watch for. In a humid environment like summer in Rio, it will creep up on you. Chances are you’ll be having such a good time you won’t pay much attention at first to the fact that you’ve mixed beers, spirits and the god-awful 7% alcoholic energy drink Skol Beats (the phrase you will hear most during Carnaval will almost certainly be street vendors shouting ‘SKOL BEATS! SKOL BEATS SKOL BEATS SKOL BEATS!’) Take water breaks or you will risk wasting large portions of Carnaval week feeling rotten and sorry for yourself. Also, get to the beaches for sure (Rio beaches never get old, they are so good) but take regular breaks from the sun.

Take care, but know that Carnaval is as safe as any other major event

Honestly, since I’ve lived in Rio (and well before, in fact) people have gone on and on about safety and crime issues. I’ve so far witnessed nothing of the sort. Obviously, it does exist and Rio has many issues of this sort which still need addressing, but my advice is that if you’re sensible there is no need to worry. If you’re not sensible and you get drunk and don’t look after your possessions, sure, you’re asking for trouble. But only in the same way you would be at any UK festival. Also, remember that Brazilians during Carnaval are probably the happiest, most positive party-goers in the world. If, where you are from, getting drunk and violent is the done thing, know that that absolutely won’t go down in Rio. Embrace the culture, party like the locals and you will have a great time and probably make some awesome friends in the process.

Savour every moment of Carnaval

At times, the week will feel like an endurance, especially if you stretch it out with pre-Carnaval (the locals tend to party the week before and then leave the city when all the tourists descend) and the Champions’ Parade the following weekend. However, for most of us this is a once in a lifetime experience to be part of a cultural event unique on the planet. It can be almost overwhelming at the time, but know that you will remember it forever and have more fun than you could have imagined. They don’t call Rio’s Carnaval ‘Disneyland for adults‘ for nothing… 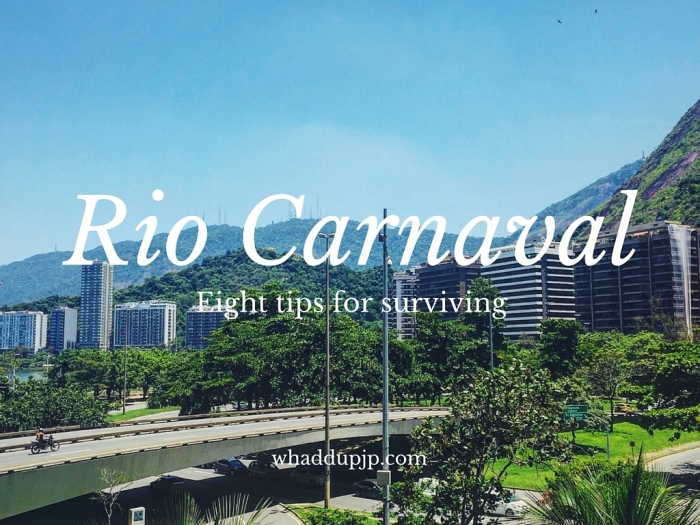 Are you planning on visiting Carnaval? Or maybe you’ve been before and have some tips? Let me know your thoughts below.