What a day and what a race that turned out to be. My coach to the 70th British Grand Prix in 2015 arrived early, soon after 9:30 and in no time I was running around the circuit like a kid at Christmas. I had jumped at the opportunity to buy a 44% discount ticket (to celebrate Lewis Hamilton’s car number), unable to resist the chance to return to the place which holds so many memories for me.

On the coach through leafy middle England between Northamptonshire and Buckinghamshire I felt like I was stepping back in time 20 years.

Every year from the age of three through 20, my Dad took me on the annual pilgrimage to Silverstone, the home of British motor racing. In the early years we would set off at around 3am from Sussex with me in the back, a boy too excited to nap feeling that familiar once-a-year anticipation. I remember always stopping for a pee-break not far from the circuit by some noisy pylons in a field, hearing the sound of F1 engines in the distance even over the electric buzzing. It always gave me goosebumps.

From 2004 my Dad, myself and my brother (who had joined our annual pilgrimage from 1997) started going for Saturday’s qualifying also and staying in the car overnight. The festival atmosphere on the Saturday evening in the campsites was like nothing else. Then we would wake at silly o’ clock when the gates opened and I would run ahead with the chairs to grab us a spot.

Something about the place evokes memories. I will never forget cheering David Coulthard in ’95 because he was Scottish, only to realise Johnny Herbert was English and quickly switching allegiance, or Michael Schumacher winning in the pits in the rain whilst I was being sick at Copse in ’98, or Schumacher’s crash in ’99 at Stowe, or the mud of April 23rd 2000, or Father Neil Horan the crazy priest running up the Hangar Straight towards Webber whilst Coulthard lost his headrest at Copse in ’03, or Hamilton in the rain in ’08 or… I could go on and on, but it was time to make new memories.

How Silverstone has changed this decade

We spent many races watching from Luffield but over the years tried out pretty much every vantage point around the track. It was a place I knew like the back of my hand.

Except all that has changed. When I last attended the British Grand Prix in 2009 it was due to be the last one at Silverstone, with Donington having signed an agreement to host the race from 2010.

When that deal fell through Silverstone stepped in and from 2010 a brand new track configuration was used and the spectacular ‘Wing’ pit complex built. The five races I missed had been won by Mark Webber (twice), Fernando Alonso, Nico Rosberg, and the previous year by home hero Hamilton.

Exploring the new configuration was akin to having lived in a house for ages then returning years later to find the new owners had swapped all the rooms around. People were just wandering across Priory corner and taking selfies under what used to be one of the fastest corners on the F1 calendar, Bridge. It was bizarre! 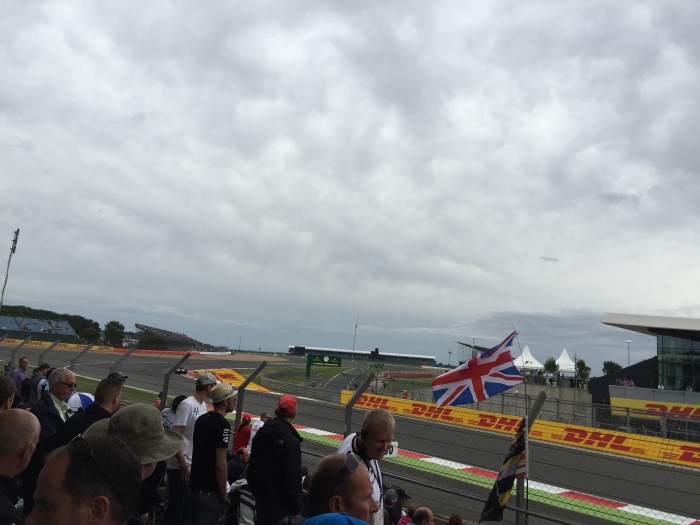 The number and quantity  of food and drink outlets on offer had increased since 2009, with duck burgers, wild boar and even zebra on offer. You can, of course, bring your own food and traditional Fosters tinnies!

I walked along the old circuit to Abbey where my Dad and brother sat in ’99, ’00 and ’01. It used to be a left-right chicane halfway round the track but these days is a fast right-hander that forms the very first turn after the new pit straight and Wing complex.

Choosing where to watch the British GP from

I met up with my Dad and brother who had continued to attend each year in my absence and had as usual camped since Thursday. They informed me that the camping facilities have dramatically improved in recent years also.

The GP2 sprint race had taken place whilst I was exploring the circuit, the series delivering another classic race in 2015, this time won by Rio Haryanto – a driver I was impressed by in the GP2 race at this year’s Spanish Grand Prix I attended in Barcelona.

I watched the Porsche Supercup as I checked out the vantage point from my Dad and brother’s grandstand Club A situated at the final corner on the circuit. I deliberated where to watch the Grand Prix from; there was a decent general admission area on the main straight and another at Club with a small gap through the barriers to Club chicane. Both of these I would have been at the very back for – not much use when everyone inevitably stands up at the race start. Hence I plumped for the large grass banking which protrudes out towards Club chicane and found a spot right at the front. That bank is absolutely packed and has a real festival vibe which is probably why Lewis Hamilton chose it as the spot to jump off the drivers’ parade bus and run over to the adoring crowd to sign autographs.

I legged it over to where hundreds of people were shoving caps through the fencing for Lewis to sign. I failed thrice to get him to sign my ticket, hopping round the scrum each time following his movement along the fenceline until on the fourth attempt, success! The reigning world champion and championship leader signed my ticket! 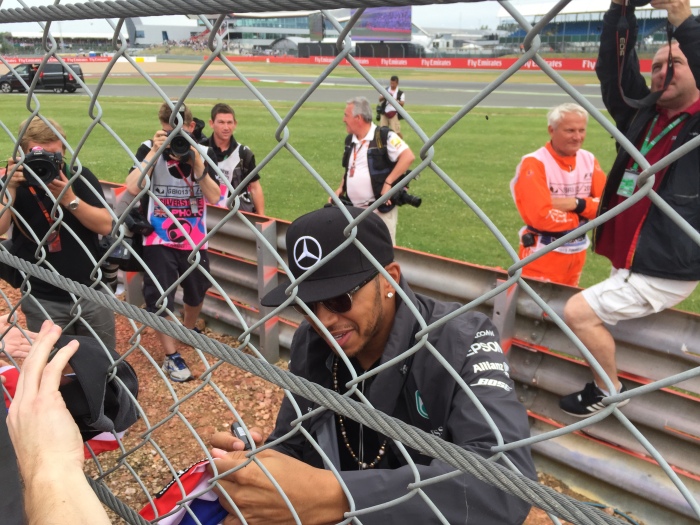 My day was already epic and at that moment the RAF parachuters smoked their way under the sun and down to the circuit. I saw them hanging out later and told them how impressed I was by their performance. Top blokes, all of them. A marching band and a jaw-droppingly impressive impressive RAF Typhoon later it was time for the main event. Home hero Hamilton lined up on pole alongside team mate Rosberg, followed by the two Williams cars and the two Ferraris. The top ten started on used medium tyres with only 13th places Max Verstappen starting on the hards. 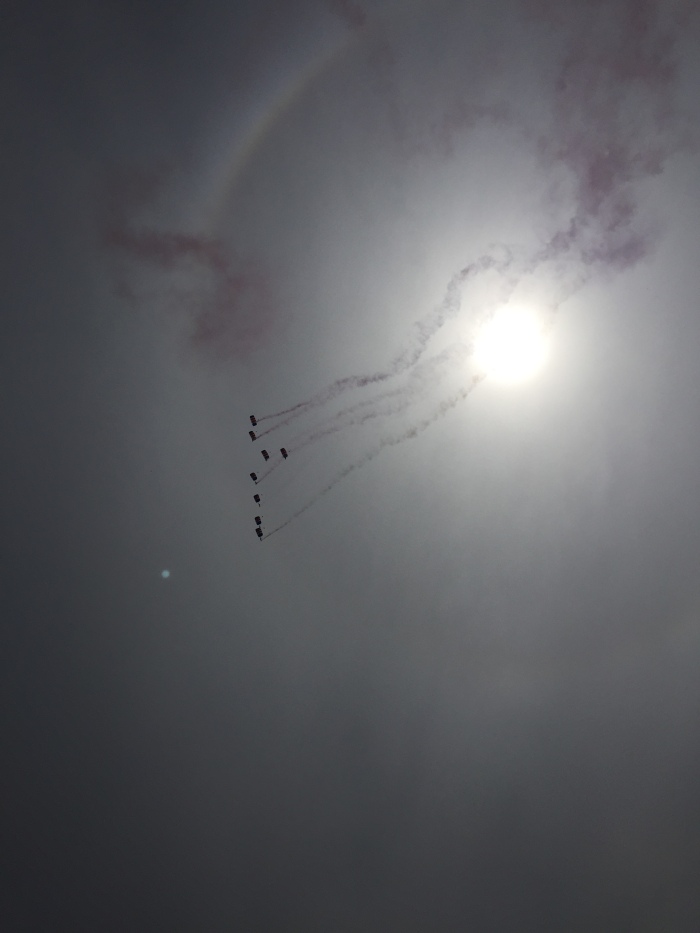 The Williams drivers shocked the world by jumping ahead of the Mercs at the start. Felipe Massa led Hamilton who only just held second place through The Loop with Rosberg in fourth. An impressive Nico Hulkenberg, having recently won Le Mans, was fifth whilst Daniil Kvyat split the Ferraris in seventh. The safety car was deployed for collisions which wiped out Jenson Button, both Lotuses and left Alonso pitting for a new front wing. 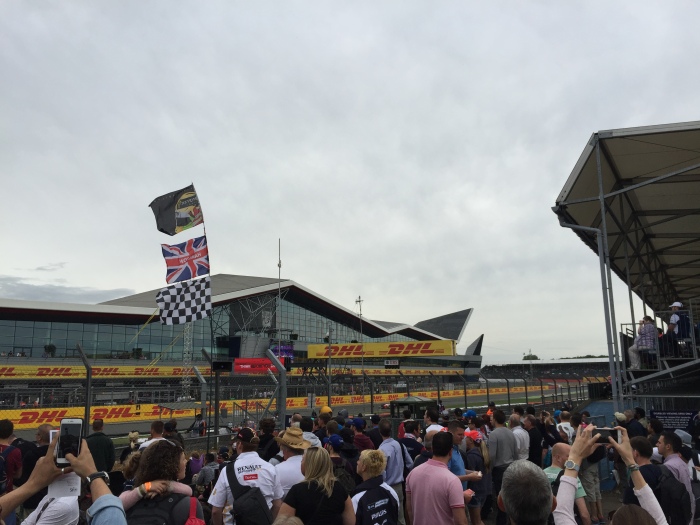 On the restart Hamilton darted right at Club (these days you can overtake anywhere from the last safety car line rather than waiting until the start/finish line), locked up and attempted a bold move around the outside of Massa, only to run wide and lose second to Bottas. For the first time in far too long Williams led 1-2 at Silverstone, a sensational performance for the Grove-based team.

Kimi Raikkonen pitted at the end of lap 13 from P6 followed by Vettel, Ericsson, Alonso, Ricciardo and Sainz, the latter two swapping positions.

The leaders pitted around the lap 20 mark (the race is 52 laps on the new configuration not 60 laps as it was when I last attended). Hamilton pulled off the undercut beautifully, ending up a few seconds clear of Massa and Rosberg after blistering in and out laps. Bottas slotted in third to compound Nico’s woes. A while further back lay the Ferraris of Raikkonen and Vettel followed by Kvyat, Hulkenberg and Ericsson who soon pitted once more and dropped behind Sainz and Perez. Alonso and the Manors made up the remaining runners.

Ricciardo clearly had problems and retired from the race when he made his third pit stop. The Ferraris had benefitted from the stops whilst the Force Indias had lost out.

Just as a message saying ‘rain in 15 minutes’ flashed on the big screen opposite where I was stood, the Virtual Safety Car was deployed for Sainz’s stricken Toro Rosso at Club, also where I was watching from. I had seen Virtual Safety Car used in a support race in Barcelona but this was the first proper appearance in a Grand Prix.

On lap 35, still under brief VSC conditions the rain began at Club. It wasn’t very hard although we heard reports that it was worse at the northern end of the circuit around Luffield, Woodcote, the old startline and Copse. Roberto Mehri, Sergio Perez and Vettel all had off-the-circuit moments whilst Rosberg came alive in the conditions and began to really challenge Bottas.

By lap 38 it was clear that there were now more racing lines available in the damp and the Manors chose to pit for inters, Mehri locking up spectacularly in front of us in an attempt to slow down for the speed limit line. Marcus Ericsson and Alonso followed them in whilst Raikkonen let teammate Vettel by before pitting at the end of lap 39.

By now the old pit straight looked very wet and the Mercs were having differing degrees of success in the rain. Rosberg finally found a way past Bottas whilst Hamilton ran off at Copse. In no time Rosberg was past Massa for second place whilst Raikkonen was very slow on the inters, seemingly having boxed too early.

The British weather though was to sprinkle yet more excitement on an already enthralling race. Lewis pitted a lap before Rosberg and unlike so many other times in his career, the Englishman timed his tyre change to perfection. Nico had been catching him at two seconds a lap but that one extra lap on inters gave Hamilton a nine second advantage he then never looked like losing. In the chaos Vettel jumped the Williams cars to rob them of a podium and follow Rosberg home in third. It was a shame for the Grove team – Massa’s son Felipe Jr had predicted a podium for his Dad but sadly didn’t have the foresight of say Paul the World Cup predicting octopus.

Walking the track at Silverstone

At the end of the race I ran round to the track gate and spilled forward with the thousands in the record crowd across the gravel and the circuit to under the podium where I saw the anthems, trophy presentations, champagne and interviews with Frankie Dettori (a bizarre choice). 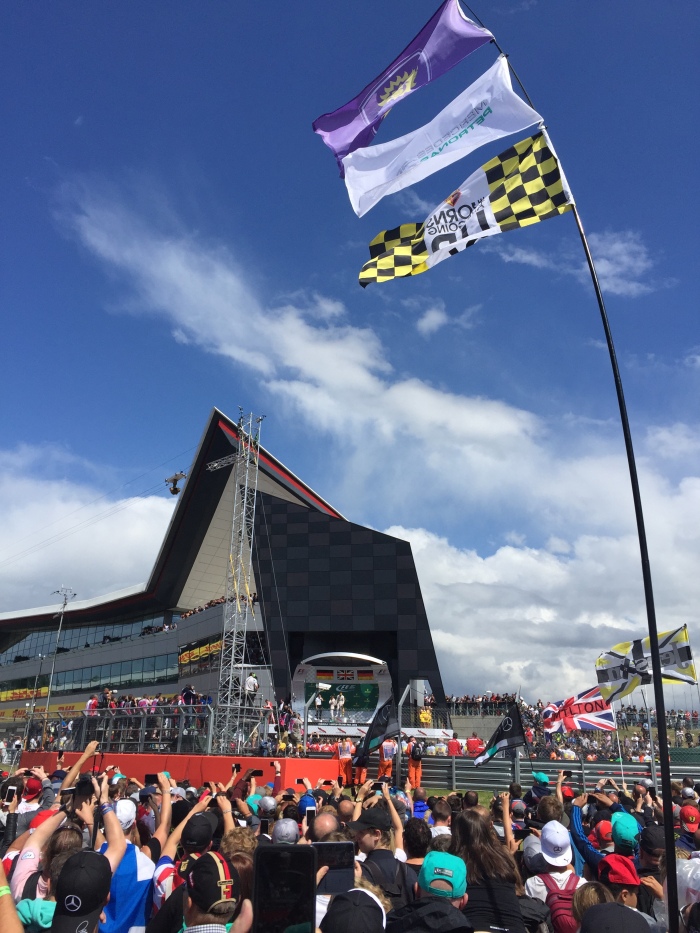 I rang my Dad and brother and asked where they were in the massive throng of people. They said they were stood by a bloke holding up an inflatable hammer. Unfortunately thanks to the rise in popularity of Lewis’ catchphrase ‘Hammer Time’ there was more than one person holding an inflatable hammer!

The three of us once united walked the track through Abbey, Farm, The Loop and the Wellington Straight which I had never seen before so was keen to explore. I have to say the changes since 2009 at Silverstone have been fantastic. The new circuit is great for racing and the whole venue was buzzing more than I could ever remember it. I would highly recommend a visit – the British Grand Prix is a unique event.

Now I really mustn’t leave it six years next time! 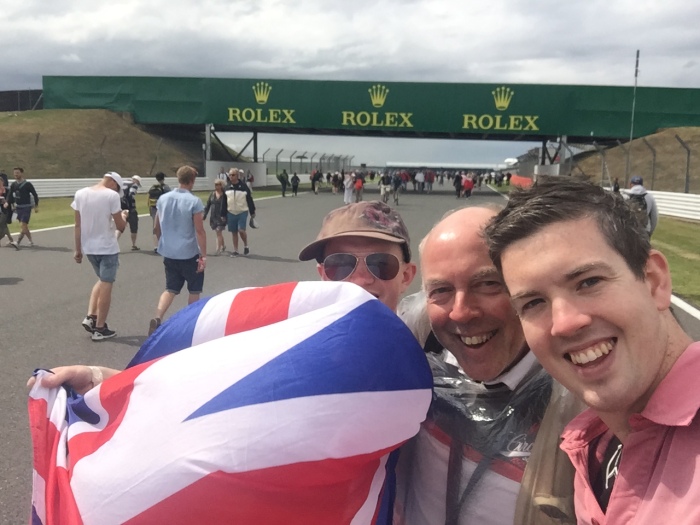 Have you been to Silverstone? What do you think of the circuit?

6 thoughts on “My 19th British GP: How Silverstone has changed this decade”