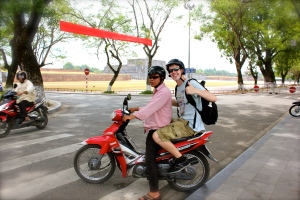 The best way to get around Huế

SE Asian coach pick ups are nearly always late it seems, and this was no different when we got picked up in Hoi An for our bus to Huế. We drove through Da Nang, a gorgeous city on the river far more modern than Hoi An with a gorgeous bay framed by lush green mountains.

Everyone who has invaded this country has left behind their influence. After 1000 years of occupation, the Chinese left behind distinctive buildings and architecture. The French brought railways. The Americans, however, left Agent Orange and mines that still kill a thousand people a year. Amazingly, right after the Yanks left, the Chinese tried to invade. Weary and wrecked after a decade of war, the Vietnamese still managed to send them packing in just a few weeks, despite most of the Vietnamese army being in Cambodia fighting the Khmer Rouge. These truly are a resilient and determined people. 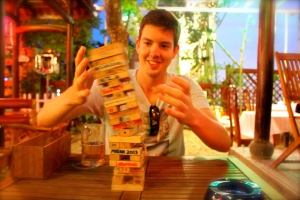 Our bus broke down in Huế so we got off and searched for the Binh Duong Hotel ourselves. Of course, almost as soon as we had alighted the bus got fixed and overtook us leaving us to struggle down strange roads in the blistering heat. Mercifully, a man approached us just as we were overheating, holding a board with Jodie’s name on it. Thinking this was yet another local trying to sell us something, we were ready to give the stock answer không cám ơn (no, thank you in Vietnamese) when we read the board and realised he was after us!

Our saviour took us back to the hotel which seemed very nice. We checked in and went to a place called Hanh for lunch, a recommendation from the hotel. It was perhaps the best Asian meal we had had yet: five courses of proper Vietnamese food (three of the courses were spring rolls, but it was still fantastic). 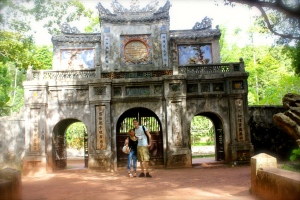 We hid from the heat in the afternoon in our air conditioned room, before taking a walk around the town centre and down to the river. It was very picturesque but we got accosted quite a lot by people trying to sell us boat trips. One of the streets seemed friendly and backpacker-y and all the restaurants looked good so Jodes chose the one with the pretty lights, Le’s Gardens. It turned out to be an inspired choice as the staff were really friendly and our waitress Nhan insisted on bringing out jenga and playing with us! Le’s Gardens had nice food, too and we gave Nhan a tip – something we hadn’t done in Asia thus far.

The next morning we had a great pancake breakfast brought to our room. We hired motorbikes and drivers to take us round the Huế surrounding area. Our first stop was the Tu Hieu Pagoda, a peaceful monastery active monks and with a pretty fish pond (I even spotted a tortoise!) Back on the bikes it felt so fun and perfect to be catching a cool breeze in the already stifling sun. After a brief stop at the incense stick makers, we arrived at the Tomb of Tu Duc, the former emperor of Vietnam. Tu Duc had 104 wives and survived an attempted coup from the many servants he had to build him the impressive complex between 1864 and 1867. Central is the Luu Khiem Lake he used to row across to reach a purpose built island to hunt game. Opposite is Xhung Khiem pavilion where he used to write poetry. The main tombs were cool and the Chamber, used as a theatre, had emperor and empress outfits to dress up in. Naturally I couln’t resist… 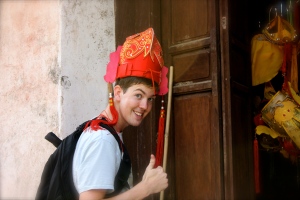 Dressing as an emperor at Tu Duc Tomb

Ridiculously, Tu Duc was never actually buried there. His remains, along with his treasures, were buried in a secret place by 200 servants who were all beheaded to preserve the secret. He sounds like a lovely bloke, doesn’t he? 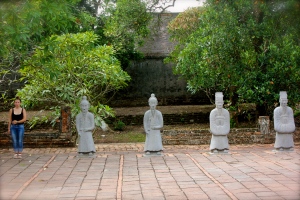 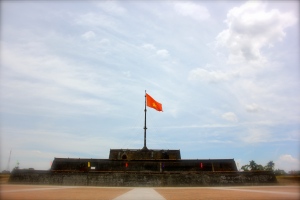 4 thoughts on “Huế – Motorbikes and Monasteries”