Hoi An River at Dawn

Stumbling off the night bus after very little sleep, I decided that there were worse places to land up than Hoi An. The chap from the Sunflower Hotel was waiting to take us back, where we showered and researched Hoi An’s famous tailoring industry. We asked at reception and they showed us a book of recommendations by previous guests for where to go and lots for where to avoid.

‘Peace’ was well recommended so we took the free hotel shuttle minibus into town to check it out. Like the reviews said, the women there were very good and spoke great English. Jodes recognised the material as being of high quality and they took every measurement you could think of. We left them to make my suit overnight, to be collected the next day.

The historic town of Hoi An is charming and picturesque and has the quaint feel an ‘old town’ district would in another place. Down by the river was a market and colourful boats bobbing about – the whole place was just lovely. We looked in a shop that sold amazing wooden boats but I decided to be touristy and instead bought a $5 ‘Good Morning Vietnam’ t-shirt!

Vietnam in August is pretty warm and by now we were starting to melt so we got one of the shops to ring the hotel taxi for us. Back at the Sunflower Hotel we had an ace lunch of 5 spices pork, chilled by the pool and had a siesta. In the evening we ordered a dress for Jodes at a shop called Violet, had more 5 spices pork and watched the International Space Station fly over, an experience that never ceases to be humbling and inspiring in equal measure, particularly in a place as beautiful as Hoi An. 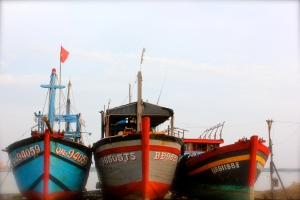 The colourful boats on our photography tour

We were up at 4:40 the next day for a photography workshop tour. Our guide was a Dutchman named Peter and we were joined by a nice Melburnian couple. Over coffee on the littlest of stools Peter discussed apertures, ISOs and shutter speeds – I learnt quite a lot even though I was using a video camera and not a standard image camera.

Our first photo opportunity came on the ferry across the river as the sun rose above the water. On the bank of the other side villagers were catching and bringing in fish by boat. I played with the settings on my Sony video camera and got some really nice effects. Further down the river some of the locals actively wanted their photos taken with us but it turned out they expected us to pay them for the privilege!

Watching the hustle and bustle I realised this was a quaint scene that is sadly missing from much of the modern world. Even more sadly, this particular scene will surely soon be history too when the currently under construction flyover highway across the river is completed and the beaches are developed.

Pete bought us fresh meat baguettes for breakfast before we visited an indoor fish farm for some low light shots. Finally, we rode the bikes back into town to the gallery and discussed the art of photography some more. It had been a great morning and it was still only 9:45!

After struggling to find a decent ATM we eventually were only able to withdraw a minimum of, wait for it two million dong. We got to peace melting and I had to wipe the sweat off before trying on my new shirt and suit, which fitted like a dream! There was a slight mark on the shirt which I got them to remove before I collected the whole lot at 5pm that evening, complete with a $3 red tie the lady picked out for me which looked awesome. The best bit was that I successfully managed to communicate numbers in Vietnamese with the Peace ladies!

That evening we had dinner over the river and saw the beautiful lanterns and market. As we were admiring them and taking photographs the wind whipped up and the locals hurriedly put away the lanterns and started battening down the hatches. There was a slight sense of panic and barely organised chaos as we retreated back over the river to Peace. About 20 motorbikes all managed to nearly run us down as lightening flashed on the horizon. Jodes got sized up for a second dress I persuaded her to let me buy her and back by the hotel we picked up her first dress from Sunflower. 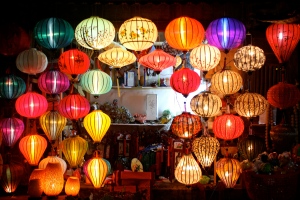 Our last day in Hoi An was Vietnamese National Day celebrating Ho Chi Minh’s declaration of independence in 1945 on September 2nd. In Hoi An Ancient Town (the proper name for the town centre) we went to Peace to pick up our suit and dress.  They needed half an hour more so we wandered round a bit and melted some more before picking them up – they were both absolutely worth the wait though.

It was the kind of day where anything other than just chilling by the pool would be madness so that’s what we did. In the evening we wandered along the picturesque river and and dinner at ‘For You’, which did 50 cent Saigon beers. We watched the locals light lanterns and float them down the river, which was a beautiful sight. Others threw up flashlight toys high in the air that floated gracefully back to Earth. It was kind of magical to be there amongst the locals on their national day, in the same way that 4th of July in America or Australia Day was special. 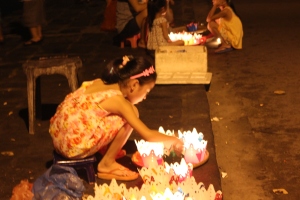 Hoi An featured a lot in our popular ‘Best of South East Asia’ video – the colourful, vibrant town has to be seen to be believed so check out the video below:

5 thoughts on “Hoi An – a Tailored Suit, a Photo Tour & Vietnam Day”