Last summer my girlfriend, my mate and I went on a road trip across the American west in a Chevy, taking in California, Nevada, Arizona, Utah, and briefly New Mexico and Colorado. It was the best trip I have ever done and I blogged about it extensively on this site. Now, after nine months in the UK the itch is back and it is time for my girlfriend and I to plan another “trip of a lifetime”. But how do you follow up the iconic US road trip?

Before we could figure out where we wanted to go, we had to decide what we wanted from this trip. We are each in our early twenties and by early autumn will be at a natural break in our career paths, each having had a smattering of semi-grown up jobs without yet having been tied down to any long term contracts. So it seems like the perfect time to do that long overdue gap year experience seeing as we both love travelling, met one another whilst working abroad and may not have a similar opportunity to take time off again. Financially, it makes sense to do it now with our own money rather than aged 18 on borrowed student loans or whatever. Regardless of the timing of the adventure, the purpose was very much about seeing continents and cultures we had not really seen before – as opposed to simply revisiting a different section of a county already seen. Once previously visited areas had been crossed off we were left with a toss up between two continents: South America or Australasia/South East Asia.

In the end the decision came down to where we would most easily be able to find work. Neither of us is in a position to fund six months of travel without finding employment whilst abroad. Hence we are going to follow that well-trodden gap year path of South East Asia > Australia > New Zealand. Except we are not going to do it in that order. Our plan is to head straight for Oz in October and work there before heading to New Zealand and subsequently South East Asia in the spring. Just like in California where we drove north from Los Angeles to San Francisco up the Pacific Coast Highway rather than south, we will be reversing convention and heading to Asia last. Taking our own route worked out brilliantly in America so I am excited to try things our own way again.

There are other limitations to when we can be in certain places. Whilst in Australia we of course plan to travel around and see as much of the east side of the country as possible. We have to do the north part of the country – Queensland, Cairns and the Great Barrier Reef – at the very beginning of the trip, before we have even worked in Australia. The reason for this is that in the spring, when we will do most of our travelling, north east Australia will be in its wet season, which is something to avoid if we want to fully appreciate our visit to this beautiful region. So we looked at flying direct to Cairns, but this involves going via Sydney anyway. Nonetheless, we shall probably take this approach but stay in Sydney for a few days before flying north to Cairns to begin our trip proper. We will not bother “laying over” in Singapore en route when the plane refuels as we will be heading back that way a few months later anyway.

After Cairns and the north of Australia, we will head back down the east coast to Byron Bay, Surfers Paradise and Sydney. Transport is something we have yet to decide on and it would seem that we have three options. The first is to take the Greyhound bus, something we have done before a fair bit in America and is a cheap and practical option. It is not the most glamorous though and there is probably a limit to how much of this one can do in a short period of time. The second option is to take the train, something which may be great to do from Adelaide to central Australia, Alice Springs and Uluru (aka Ayers Rock. I did a painting of Ayers Rock the other day and got very excited by the incredible geography of the place – it reminds me a little of Monument Valley in Utah due to its epic majesty and how it dominates its surrounding landscape so brilliantly.) Our plan after working on the East Coast and doing New Year in Sydney is to head to Melbourne for the Australian Grand Prix (provisionally 17 March 2013) before heading to Adelaide and on to the hot desert in the middle of the country. Given how many miles we will be racking up, the third option of hiring a campervan or car seems like a great idea – especially seeing as companies over there allow you to drop off the vehicle somewhere thousands of miles from where you picked it up at no extra cost, unlike many companies in the States we encountered. I now have experience of driving large vans at work and the Aussies drive on the left so to do another road trip would be a dream. 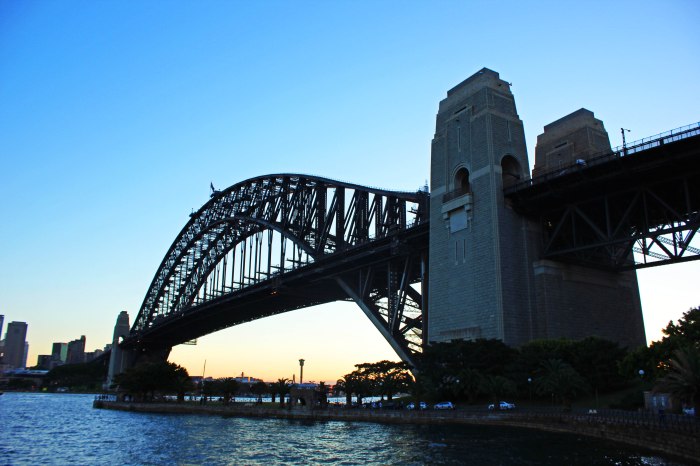 Of course, we have three weeks to get around New Zealand after this and will face the same dilemma of coach or car. Perhaps we should save the road trip for the epic landscapes between Auckland and Christchurch etc? We looked at heading one way down the North and South islands but due to Auckland being the airport we would have to head out of anyway, we may end up doing the loop most people do around New Zealand, which would let us take in more places.

Then the issue of timing rears its head again. My girlfriend Jodie’s birthday on 17 April 2013 happens to coincide with the annual Thailand water fight festival, something she insists we cannot miss! By then we have to have been through Singapore and Malaysia before heading out to Vietnam, Laos, Cambodia etc… There are still a lot of details to finalise but plans are well underway and I couldn’t be more excited.

One thought on “Planning The Trip Of A Lifetime”