Action from the GP2 race

I actually had a good night’s sleep in the sweatbox hostel and felt much better after a shower. We spent the morning charging our gizmos then left the hostel at 2am and ended up in Raffles Shopping Centre. Supermarket lunch turned out to be good value for money and we walked up lots of steps to a gorgeous park in the middle of the city to eat. It was so peaceful – like all good city parks it felt like we were in a bubble of tranquility protected from the surrounding chaos.

The GP2 feature race was starting as we got to our grandstands. Jolyon Palmer put in a cracking performance to battle back to victory after losing the lead initially. We chilled by the beautiful Singapore river before FP3 back in the grandstand. We wandered to zone 4 and watched Porsche qualifying then photographed the Marina Bay Sands hotel light show. As we grabbed food a fabulous arts show Chaos was going on next to us with beautiful animal models lit up and walking/flying through the air in the Padang field, controlled by puppeteers underneath.

Our seats opposite Marina Bay Sands

There was a massive queue to get over the overpass before quali’ but we made it back as Q1 started. Vettel set lap records in Q2 and Q3 and then gambled by not using an extra set of tyres and electing to do one run. Rosberg, grosjean and Webber came close but in the end the young German had done just enough.

We raced for the grandstand to the Padang stage in time for the Killers, making our way up to the barrier – quite far back but close enough for a decent view. Brandon Flowers was so charismatic and the band were on incredible form. It was so cool to finally see band whose songs were the soundtrack to my teenage years and whose lyrics I knew off by heart without even realising it.

Vettel round the back of the circuit

It was a really sweet festival atmosphere and an amazing day. Palmer was spectacular, Vettel sublime and the Killers sensational. For a place that’s seemingly assigned to look good on telly, I was amazed that Singapore was actually even better in real life. Imagine Monaco but with a real blend of old colonial architecture with ultra modern skyscrapers that perform sophisticated light shows across the bay.

Beautiful gardens on the infield host the concerts and the crazy thing was that our tickets only got us access to half the track but it was so big that that was more than enough for three days; if we had paid more for a top grandstand or combo of grandstands we would have wanted to get our money’s worth on them and not enjoyed exploring so much.

Look who made the Hong Kong Sing Tao Daily’s Singapore GP Report. Vettel didn’t get his name captioned but Jodie Louise and I did!

After another sweaty night we spent the morning charging our gear again on the Sunday, then walked into town and got a Subway in the mall. Jodes felt really ill after eating a dodgy sandwich. We made our way into the circuit and took our seats as the GP2 sprint race got underway. It was a decent race, if not quite as good as the previous day’s, won by Sam Bird making it two British victories out of two. Next up was the Porsche Supercup Asia, a fairly dull race with the first safety car of the weekend. During the safety car period we took a selfie of us in the Bay Grandstand looking across the harbour to the Marina Bay Sands Hotel where we would be staying the next night.

It was a beautiful hot race day and the excitement was really building. For the F1 drivers’ parade the drivers were all in nice classic cars, sitting out the back of them. Well, except Kimi, who was sitting in the car presumably due to his back pain, a legacy from a Magny-Cours testing crash in 2001 that had flared up again that weekend. JEV was playing on his iPod and I was the only one to cheer Maldonado but it earned me a smile. We grabbed some food then headed back to our seats as darkness fell and the anticipation built for the 2014 Formula One Singtel Singapore Grand Prix. 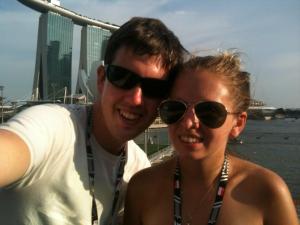 The stand was full by the race start and the noise as they roared behind us out of sight on lap 1 reminds me of sitting at tabac at Monaco 2007. Vettel stretched out a huge lead both at the start and when the safety car was brought out at mid-distance for Ricciardo’s crash under our grandstand. Rosberg was the main challenger for about two thirds of the race but it was Alonso and Raikkonen that prevailed to take the two remaining podium spots, each making their tyres last a remarkable 35 laps. The McLarens of Button and Perez failed to do this spectacularly, tumbling down the field in the latter stages. As a result there was some real action in the last 11 laps or so but nobody could touch Vettel.

We headed over to the Padang Stage once again and got a bit closer than the day before for Rihanna. At first she didn’t seem as good as at Hackney the previous year

but she got much more entertaining towards the end.

Afterwards we walked on the track which was awesome to see up close and got interviewed randomly by a Hong Kong journalist, rounding off a wonderful day.