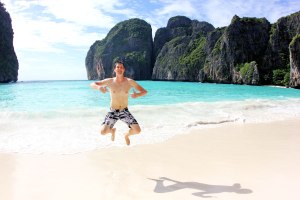 ‘The Beach’ to myself

Thai buckets are dangerous. Very dangerous. I made a mental note of this as I nursed a post-buckets-on-the-beach night hangover and struggled to watch Jurassic Park in Thai on our hotel TV.

That afternoon we joined about 25 other people on a classic Thai island longboat, which was novel. Jodes was pretty seasick on the way over (which probably had a lot to do with the aforementioned buckets). We headed all the way round to Koh Phi Phi Le, the sister island to Koh Phi Phi Don where we were staying, to Lo Sa Ha Bay, an epic Thai island cove flanked by limestone giants like you’ve seen in the movies, only with so much more grandeur in real life.

We moored up about 100 metres from land and passed our cameras to the guide to put in his waterproof bag and jumped in to the azure blue ocean. The waves were quite strong and it was tough to cross the ropes to get to the hanging net of ropes leading up to a dodgy set of ladder steps. Hauling yourself up the assault course to the slippery steps was no mean feat but we managed it and instantly the place felt more rewarding just for the arduous effort we had been through to get there, just like in ‘The Beach’ where they swam across from Phi Phi Don. We crossed through the short tropical path to Maya Bay, the beach made famous by ‘The Beach’.

Having been told it was overrated and perpetually overcrowded , we were blown away by its magnificence. The white sand seemed even whiter and purer than on Phi Phi Don. The towering karats framed the bay perfectly; the tourist numbers weren’t that bad and the sun even came out to make the aqua blue/turquoise waters dazzle. Sure, we were there in low season and it gets mega crowded  a lot of the year, but it’s popular for a reason. I mean, it’s still paradise perfection.

After the obligatory photos I couldn’t resist swimming out to a rock to climb. The water was littered with rubbish to begin with and naturally it was a much harder swim than it looked but I was determined. Upon arrival five minutes later I realised the rock was going to be a far harder climb than it had appeared to be from the shore and I nearly gave up when I saw a group of quite large crabs scurrying across it. After a minute figuring out my best scramble route I hauled myself onto the top of the rock and stood up, throwing my hands in the air whilst my girlfriend dutifully took photos from back on the shore. For a few glorious moments I was the king of paradise. I would later develop a rash from the slimy algae-like substance on the rock and I cut my foot on underwater rocks jumping back in but no matter, it was completely worth it. 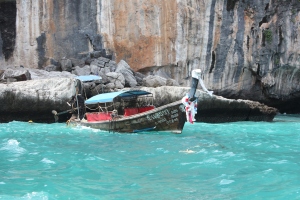 We walked, climbed, scrambled and swam back to our longtail boat,the romantically named Nang Donut. I immediately jumped back in with our (recently purchased from Phi Phi Don) underwater camera to photograph the abundance of blue and yellow tropical fish that had appeared in the surrounding waters. We moved round the island to another bay where we snorkelled with a huge variety of beautiful tropical fish for about 30 minutes. We went a bit mad with the underwater camera in our second foray into underwater photography after the Whitsundays in Australia. Someone had fish food so we got to see a whole flock of fish feeding which was pretty awesome.

We cruised past Viking Cave, a pretty hallowing full of large limestone stalactites delicately reaching down as if trying to touch there toes. We then stopped at Monkey Beach and witnessed about 30 monkeys playing, eating, stealing food, climbing trees, swinging in hammocks, screeching, scratching and shagging. These guys were wild and hardly timid. One ran aboard the Nong Donut before we’d even reached the shore and another bit a girl in our group. We had met a girl in Halong Bay who’d bitten by a monkey in Nha Trang and had subsequently had to visit a hospital at every stop up the Vietnamese coast to get rabies shots. As a result we were wary of getting too close to the natives… 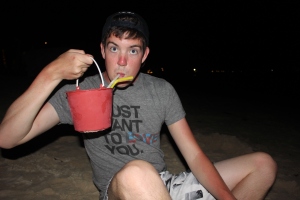 Back on Phi Phi Don we showered and had a great seafood, cashew nuts, spring onion, bean sprout and noodle dinner of Pad Thai. Even the food is fantastic in paradise (I resisted the frog skewers, though). The moonlit waters felt like a bath on soft sand, especially when the tide was out. And you can get £130 Ray Bans for £6! What a place… 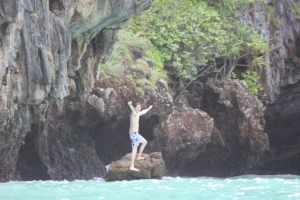 2 thoughts on “The Beach from ‘The Beach’”