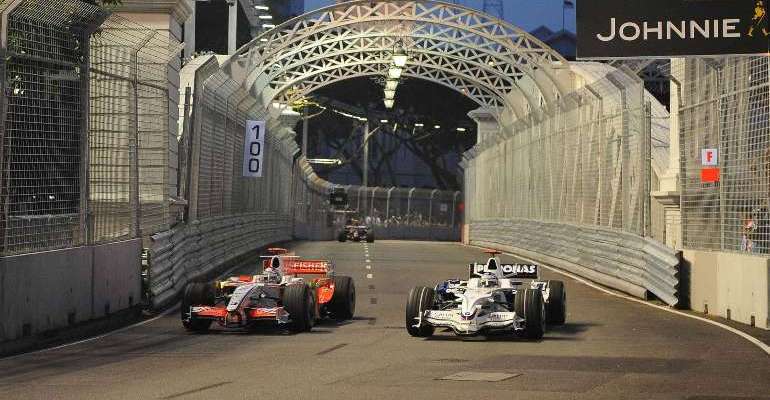 The final part of my rundown of the best F1.com videos ever features some more recent edits, all of which are spectacular and deserve a watch.

Monza is a magical place for Formula One fans, especially Ferrari fans, and in 2010 Fernando Alonso delivered a Ferrari victory to the delight of the Tifosi… This video is all about the passion of the crowd and the race itself, so 30 Seconds to Mars’ “This Is War” is a perfect choice of soundtrack. It is a majestic track that builds slowly before bursting into life, much like the Grand Prix which it accompanies so well – the video and audio seem to fit like a glove. We see the determination of Sebastien Vettel putting on his balaclava, and the concentration of Ferrari team boss Stefano Domenicalli. Clearly the video editors were thinking when they put this together. As lead singer Jared Leto sings “to the left” we go on-board with one of the Ferraris, who seems to obey Leto’s words by covering the car alongside him off the line in the run to the first corner at the start of the race. The music then quietens enough in time for us to hear every piece of gravel scrape Lewis Hamilton’s McLaren as he slides off the track after breaking his steering.

The pit stops feel like a battlefield thanks to some 30 Seconds To Mars military style drumming and some classy slow motion shots of the pit crews and, once again, Stefano Domenicalli looking broody. This is one of the few videos which genuinely tell the story and emotion of the Grand Prix, rather than some unconnected clips.

The race itself was chaotic and uncertain, so much so that even once the race began we still weren’t sure there would be a race, once the elements took charge. Eventually the race did start, after the amusing use of Duffy’s ‘Rain on Your Parade’ (a wet weather theme continued from the 2009 Malaysian Grand Prix F1.com video washout when forks of lightning were combined with ‘It’s Raining Men’). Now the drama began on track and in the edit with a fantastic fade-up of Chase & Status’s ‘Let You Go’ and slick rewinds and clever colour desaturation showing Webber’s crucial crash, making this the video of the season. The gloomy conditions and shots of cars spinning on the oh-so-slippery conditions work beautifully and sum up everything that’s great about the greatest drivers in the greatest cars taking on the elements. Mark Webber’s lonely walk back over the roof of the pits is beautifully accompanied by the haunting lyrics “there’s nowhere to run, no place you can go, nowhere you can hide…” Also, Vitaly Petrov’s crash timed perfectly with the song is worth watching the video for alone. Listen carefully at the very end, too, for the crowd and Ferrari team chanting “Fernando! Fernando!” after his spectacular victory. Again, the pit to car radio seems to blend in, if not add to the music, thanks to a little mixing up and looping of the audio by clever F1.com editors. Every time I hear “Let You Go” on the radio I sing “safety car, safety car, safety car, safety car… IN! IN! IN! IN!” I don’t care who finds that strange, the song just is not the same without it!

Quite frankly, this is incredible. It touches on the sixty year history of the sport and evokes every emotion of one of the most thrilling seasons ever. The beginning is set in a warehouse with old F1 cars covered in blankets and where you can hear the wind in the warehouse. Archive clips are shown in Jackie Stewart’s, Niki Lauda’s and Ayrton Senna’s eyes and flash up literally in a heartbeat (thanks to some more brilliant sound effects and visual effects). Champions are shown in individual droplets of water whilst the deepest voiced narrator you have ever heard discusses the progression of this insane sport (he also narrated the BBC’s award-winning pre-titles sequence “The Scream of Science” at the start of 2009). It takes the Hollywood factor up to a new level.

This is a spectacular edit with more in it than any other video (well, it is a whole season’s worth of action) and has been re-edited and improved from the original version with Pendulum’s Witchcraft for the FIA Gala that year. The post-production audio to enhance the crunches is fantastic when we have an on-board shot of Mark Webber’s Red Bull flying over the back of Heikki Kovaleinen’s Lotus, or Jaime Alguesairi’s wheels flying off in Friday free practice in April 2010 in Shanghai. The way Mark Webber’s comments of Red Bull’s team spirit being the best in the pit lane are made ironic by immediately being followed by his fallings out with eventual champion and team mate Sebastien Vettel is brilliant, as is the sublime Segway from “Flying without Wings” to the infamous Turkish Grand Prix crash between the two Red Bull drivers. Massa’s comments of “for sure, we don’t have team orders” followed by the Hockenheim fiasco of two years ago (“Fernando is faster than you!” is just funny. The coverage of the Abu Dhabi title showdown is also well worth a watch.

There had to be a Singapore race in this list. The fact that it is a night race lends itself to the Hollywood style these edits aim for, and the 2011 edition does justice to the place better than any other. The music (DJ Fresh – Louder) is great, the shots of the drivers projected on large buildings and some sublime editing of the lights being switched on followed by timelapses make this the sexiest first twenty seconds of a video ever. You also get to hear Rob Smedley, Felipe Massa’s engineer, tell his driver to controversially “destroy Hamilton’s race.” The fireworks at the end are awesome, too.

Personally, I am a fan of the older F1.com videos circa 2008-1010, but the most recent one from Silverstone shows how the videos look better than ever in HD. I still think they could push the boundaries more as they are now becoming formulaic after nearly five years, but each one is still worth a watch after each Grand Prix. The clever editing, exclusive camera angles and new addition of subtitles for pit to car radios are all there. Maybe we have just been spoilt lately by these phenomenal edits.