Last month I attended the Mexican Grand Prix, my 26th GP, 26th country, first potential championship decider and first (combined with the Brazilian GP) back to back GPs. 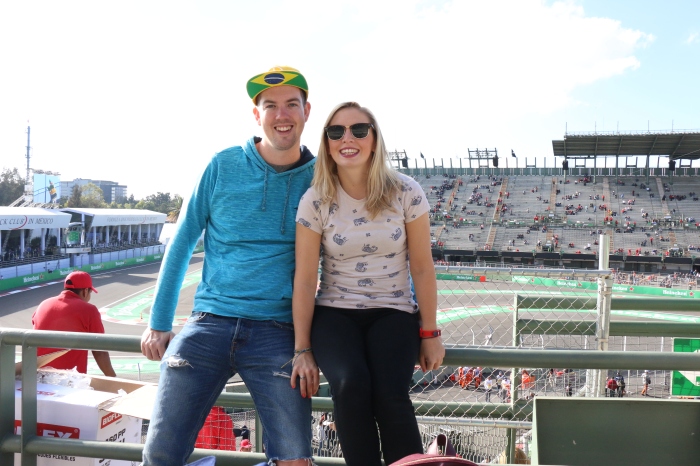 At first the weather was more Britain than Brazil but the autumn sunshine was beautiful when it arrived. The yellowed autumn palm trees were reminiscent of Melbourne’s Albert Park circuit, as was the ease of access to the circuit from the city centre by metro. Everything I had heard about Mexico’s people and their passion for Formula 1 proved true – Sergio Perez (and to a lesser extent Estaben Guttierez) truly is a rockstar around these parts. It’s a spectacular track but one can only access the section where one’s grandstand is; sadly there is no opportunity to explore the rest of the Autódromo Hermanos Rodriquez. I was so happy though with the tickets I’d chosen for the North Stand of the Foro Sol former baseball stadium where the cars snake their way slowly through the right/left/right/left/right under the grandstand before bursting back onto the main straight. It’s like turns 3/4/5 at Albert Park, Melbourne where the cars wind through a car park of pure painted tarmac and no grass or gravel. Last year’s Fly Emirates red painted trackside tarmac branding was of course replaced with Heineken green whilst the middle section still had the ‘Happy to be in Mexico’ branding, combining to create a colourful centrepiece in the middle of the stadium in front of the podium. 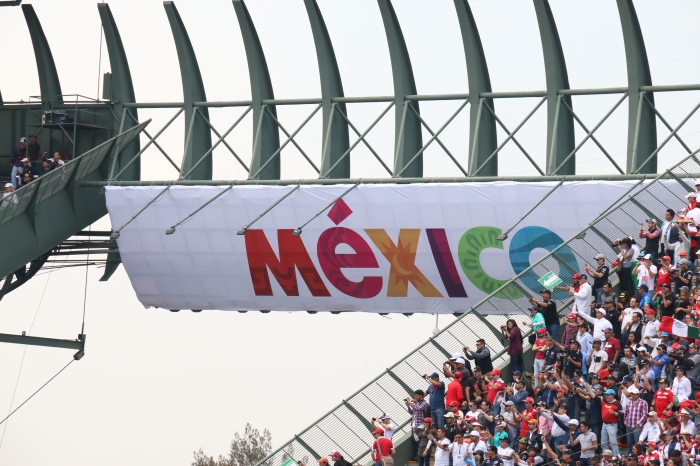 The atmosphere by Sunday was out of this world. You’ve never experienced a true Mexican wave until you’ve experienced a Mexican Mexican wave! There were a lot of Rosberg fans and understandably rockstar levels of support for Checo and Esteban. Second only to Silverstone in terms of attendance, this event really felt like one of the best on the calendar and it is staggering to think this is only its second year back.

I’ve never made so many friends at a Grand Prix either. From the guy who wanted to put an arm round me, take a photo and sing ‘LEWIS! LEWIS!’ with me because he saw I was a Lewis Hamilton fan when I belted the national anthem at the podium ceremony, to the guy who shook my hand on the bridge to the circuit and told me I was so welcome in Mexico and he hoped to see me again next year. I think many were intrigued by a British guy speaking a very Portuguese version of Spanish wearing a Lewis Hamilton Brazil cap! The magnificent podium celebration – second only to perhaps Monza where I also sat opposite the ceremony – was the highlight of the weekend with green, red and silver confetti raining down all around us.

Mexico City has lots of museums and Aztec culture and ruins and even a tall building to go up and observe the never-ending metropolis from above. We also spent a wonderful morning exploring the canals on an oh so colourful boat, passing other boats carrying Mariachi bands – just delightful. The main square Zócalo is where the spectacular opening sequence for last year’s Bond movie Spectre was filmed.  The metro is cheap and easy to use and the street food is second to none. I was surprised at how noticeable the high altitude effects are. Being 2200m above sea level meant a couple of flights of stairs would leave us out of breath. Then again, with only three quarters of the normal oxygen available it is hardly surprising. The sun also burnt my skin far quicker than it would at sea level.

Amazingly there has never actually been a Dia Dos Muertos parade in Mexico City like the one in Spectre… until this year. The locals decided that as the world would now expect a Bond style one, they would put one on themselves! We went after Saturday’s qualifying session to Zócalo and witnessed 250,000 people gather – many in incredible face paint and costume – for the inaugural parade of skeletons and ghouls. It was phenomenally crowded but a spectacular event to be a part of.

Exactly the same style bunting was ubiquitous for Dia Dos Muertos – intricate green white and red in every house and restaurant across the whole city. I loved every minute of my time in Mexico City and would love to return and explore more of this incredible country. 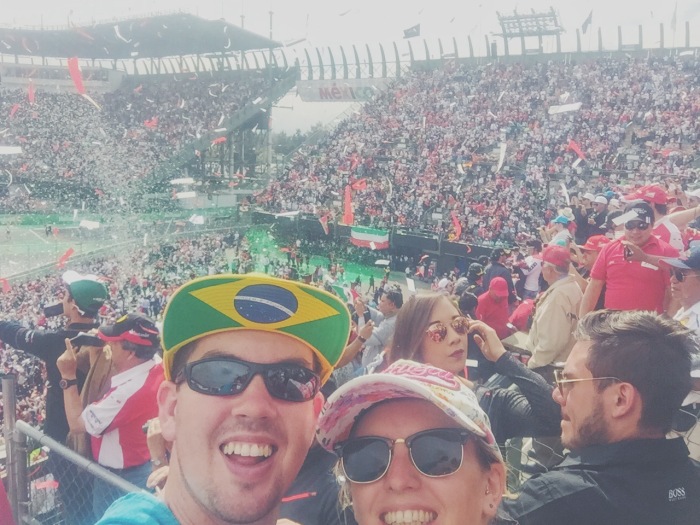