This is my entry to the @insrevolution #myfirstwheelscomp competition ‘My First Wheels’.

I never had my own car. By the time I passed my test I had started a degree in Edinburgh, a city that doesn’t require a vehicle. During the holidays I would get insured on my Mum’s old Fiat Punto but I never had that feeling of this is my car. That is, until one glorious summer after graduation which I spent in America working at a kid’s camp. I met my girlfriend there and when we finished at camp her, myself and my mate flew to California and hired a car. It was time for the road trip to end all road trips…

The guy on the phone had told us we would most likely end up with ‘some Nissan or similar’ for the price we had paid. We had booked a car for three weeks, starting and ending in Los Angeles but with big plans for the round trip in between.

We got there early as we were keen to ensure all the paperwork was sorted smoothly, this being the first time any of us had hired a car abroad. I was the only one old enough to drive and in my head I began to get excited. This was it – I was finally getting handed the keys to my car. It may have only been for three weeks but I didn’t care – I was about to live my very own American dream.

But it was even better than that. The keys the guy at the dealership handed me were not to some Nissan or similar. Because we had gotten there early, they were to a brand new Chevrolet Cruze. I was about to get behind the wheel of a Chevy. In America. I think I actually pinched myself at this point.

The car was unlike anything I had driven at the time. The California license plate got my heart racing as we drove through Inglewood past the LAPD. None of us had been to the American west coast before and it was clear that this was a trip where all those cultural icons we had grown up with through television and Hollywood movies would be all around us.

Being new, the car had Sirius XM as standard so we could even tune into British and international radio stations if we wanted (on 8-hour delay so Friday night shows actually broadcast on Friday night etc). It smelt new, it felt American and it was automatic. Yes it took a bit of getting used to, but for those of us who learnt to drive in manuals, automatics are a doddle aren’t they? I mean, this thing even had cruise control. I just had to flick a switch and we were locked in at the speed limit on the highway; no danger of getting caught speeding and extra fuel efficient to boot. The only thing we needed to buy was a tent and a GPS from Walmart, which really helped when we got lost hunting for the Hollywood sign!

Over the next few days I drove us north up the west coast. The Pacific Coast Highway features elevation changes along the side of cliffs which make nearly all the winding bends exhilaratingly blind whilst the most spectacular ocean vista tries to distract you on the left the whole time. It was incredible to think I’d been driving all day when it felt like no time at all – I would happily have turned around and driven it all again. It was simply breathtaking, and all the time I was falling more in love with my car.

That week I went surfing, escaped a skunk and ran a red light because I was so distracted by San Francisco’s Golden Gate bridge. After a few days exploring the city, we picked up the Cruze from the valet parking place and tuned the GPS for Yosemite National Park.

I had been blown away by the scenery of the Pacific Coast but Yosemite was even better. We pitched at Upper Pines campsite; I must admit I found it daunting when we read the sign informing us there had been over 100 serious ‘bear related incidents’ at that campsite alone so far that year. After dinner we headed back to the tent in the pitch black, nervously keeping an eye out for bears. Not even one item of trash could be left in or around the site and my mate was so concerned he slept in the car that night. We were very much in the wilderness and both the landscape and the adventure had stepped up a gear.

Thankfully we never encountered any bears and the next day we drove out of the stunning mountainous landscapes of Yosemite and into the most desolate place I’ve ever known. As we headed from 9000 feet above sea level to the dusty wasteland of Death Valley at 3000 feet, it occurred to me that if the car broke down in the desert we would be in real trouble…

We waited all day for the in-car LCD to top 99° fahrenheit and then all of a sudden, mid-afternoon, it shot up to 109°F, the hottest temperature I’d ever experienced. Incredibly, whilst 109°F registered on the display, there were spots of rain on the windscreen – quite surreal. The rain passed as soon as it arrived, however, and the temperature slowly increased further to 112°F. It’s a crazy feeling to drive through a desert knowing you’ve never been hotter in your life. 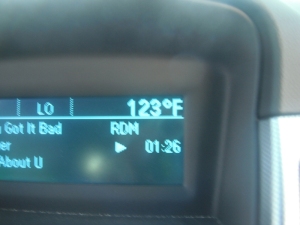 Later in the day one of us glanced at the dashboard and saw the temperature was increasing even further and we started taking a photo of the display every time it went up. Unbelievably, it got to 123°F in the evening. Believe me, that’s hot. At one point I put my hand down on the back seat in a sticky puddle of goo, only to realise it used to be a cheese sandwich. That was when we realised keeping food in the car wasn’t a great idea at those kind of temperatures. We stopped at a sign that said we had reached sea level, yet there was no water to be seen for the miles and miles you could see in every direction.

Thunderstorms and sunrise over the Grand Canyon made the next few days exhilarating, but the majestic Monument Valley at the Utah/Arizona border was an experience I’ll never forget. When we arrived the woman at the gate of the national park strongly advised that our car did not have sufficient ground clearance to make it around the seventeen mile trail through Mon Val and that we should not attempt to drive it.

Obviously being young and reckless this sounded like a challenge. Now this track was a very rocky dirt road only really suitable for 4x4s, which wound over very large rocks down very steep inclines and around tight corners with dips in the road where a car like ours could easily get beached.

Essentially it was a case of driving with the brake and steering all over the road and back around large holes. Off-roading or rallying is a better description of what I was doing than driving, all this in a rental car of course.  As soon as I got round the first corner and had to keep to the right due to an oncoming car, I realised this would be a lot harder than it looked. I had my two passengers on lookout for perilous rocks and dips in the road whilst I slowly drove a very zigzag route down what we thought was the safest path. It was genuinely scary but very cool at the same time – it was the only time that we were actually distracted from the majesty of the great ancient monuments around us. It was even more precarious coming back up as it was so steep and there was so little traction; I couldn’t just stop when I saw a large rock or natural pothole or the car would definitely have gotten stuck.

Finally we made it out and after three incredible weeks, we took the Chevy back to LA. Thankfully after our cleaning of the car the handover was smooth (we could not have afforded any surcharges!) Still, it was heartbreaking to say goodbye to the Cruze after doing 2828 miles in it, surviving bear country, an off-road adventure in Monument Valley and 123° heat in Death Valley. It may have only been a rental, but to me that Chevy will always be my first car.

One thought on “My ‘First Car’”