This November I’m joining thousands of wannabe writers in a quest to pen a 50,000+ word novel in just 30 days for the National Novel Writing Month or #NaNoWriMo initiative.

Why am I writing a novel now?

It’s a bit of a bonkers idea but one that has really taken off since it began back in 1999. I only heard about i myself around a month ago and my initial reaction was, like most people, ‘lovely idea, always wanted to write a novel, but I’m too busy/scared of failure/it’s just not the right time’. Of course, when I was completely honest with myself I realised there would never be a right time, so I started drafting a plan just to see what would happen.

I have now spent the majority of October reworking that plan, adding character backgrounds, chucking in all sorts of curveballs and twists and generally trying to convert a bland original idea into something I will actually want to write every day in November.

What will I actually achieve in my novel writing challenge?

Having chatted online to a few other NaNo rookies and experienced writers, it seems that there is no right or wrong way to go about this. Nobody is under any illusion that just 30 days of work will produce a polished work of art – the aim is just to get a first draft done by December, then not look at it for a bit before starting the tough editing process.

You see, NaNoWriMo is about challenging the inbuilt tendency we all have to favour quality over quantity. It’s about realising that the majority of first drafts are never completed because budding authors are perfectionists and give up because they can’t make the first draft a work of art. By taking on the NaNo challenge, I’m accepting that a lot of what I write for my first draft will probably be crap, but that’s okay as long as I get a first draft done. Then I will have something to work with.

How much novel planning have I done? 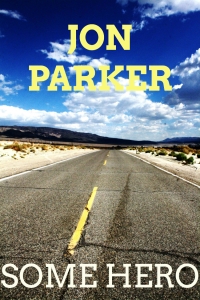 ‘Some Hero’, my novel cover

Like most I imagine, I now have a plan that I’ve worked pretty hard on, but I am completely unsure if the final product will be any good. Having invested so much already in my characters I’m desperate to see it through and for the final novel to at least be interesting to myself. I couldn’t even tell you what genre it is really, it’s a sort of mash up of an adventure, romance, coming-of-age hero story for the modern day with some Greek mythology parallels sprinkled on top. I think. My working title is ‘Some Hero’.

On the advice of other participants, I have downloaded software called ‘Scrivener’ on trial which is used by all sorts of writers and allows you to edit chapters individually rather than having to scroll through an unwieldy endless Word document. I’m loving it so far as I have used it to plan 25 chapters, with three scenes per chapter and can cross-reference my workings easily.

I must admit I’m rather daunted but excited. At least if I see it through to the minimum word count of 50,000 I can pat myself on the back and say that I actually wrote a first draft of a novel once, something many wish to one day do but will probably never get around to. I’ll let you know how I get on…

5 thoughts on “Writing a Novel for #NaNoWriMo”