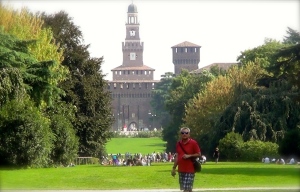 After a slightly more leisurely start than normal, we took the subway blue line to Repubblica where we took the yellow line to Stazione Centrale, using our bargain €4.50 transport day tickets. My broken Italian tre francobollos per Inghilterra per favore got us some stamps for our postcards and then we took the green subway line to Moscova to browse the traditional Italian markets.

I had booked tickets online for us to visit the San Siro stadium. We did a self-guided tour of the pitch, the mixed zone and the Inter Milan and AC Milan changing rooms (the two famously share the stadium, playing home games on alternate weeks). There was also a cool museum and shop where I bought my brother Will an AC Milan tracksuit as an early 21st birthday present. Outside the stadium the car park was coated in paint following a massive colour run the previous day.

The sun was well and truly beating down once again and we hopped back on the green line to Cardona to explore Parco Sempione. To get to the park we passed Castle Sforzesco, the mighty red brick castle whose defences were designed by da Vinci and whose moat was drained by Napolean.

We strolled into Parco Sempione, past the Palazzo d’Arte, the Rationalist Palace of Art and peered through the railings at the bizarre sculpture Fontana dei Bagna Misteriosi, the Fountain of Mysterious Baths.

The Torre Branca steel tower was not open so we carried on to Piazza Sempione, Napoleon’s Arch of Peace with bas-reliefs of his defeat, ironically not of his victories as he had planned. The Arco della Pace marks the start of Corso Sempione that amazingly connects Milan to Paris.

Further round the park we found the Arena Civica, a small colosseum that Napoleon flamboyantly opened with a chariot race and was later used, thanks to ingenious engineering, for pretend sea battles by flooding the place! These days it’s used for football, rugby and track and field events still.

We checked out the fish pond at Acquario Civico but the aquarium itself was closed on Mondays, like the vast majority of Milan’s museums.

After a panini and a coke at the lush setting of Bar Bianco under the shade of the trees, we crossed the oh-so-romantic Ponte della Sirenette, the Bridge of Mermaids before strolling out of the park past the Expo 2015 setup.

We strolled down Via Cusani and then checked out Fabriano stationery shop on Via Ponte Vetero but it was expensive so we headed down Via dell’Orso and up Via Brera to Rigadritto instead. Here I found cute stationery for my girlfriend who had just found out she was going to university so deserved some Rigadritto treats.

From there we moved on to the Quadrilatero d’Oro, the world’s most famous shopping district. We peered in windows on Via Alessandro Manzoni, Via della Spiga, Via Sant’ Andrea, Via Gesù and Via Monte Napoleone but Gucci, Prada et all weren’t exactly in our budget and having carried bags around all day we were probably too sweaty to be allowed in anyway!

After a quick rest atop the steps at Piazza Croce Rossa, we walked back down Monte-Nap and down Vittorio Emmanuale II to Il Duomo. The previous week we had seen the vast cathedral at night, but in dazzling sunshine it was a whole other spectacle to marvel at.

Just when we thought we couldn’t be further impressed by Milan’s magnificent architecture, we strolled through the Galleria Vittorio Emanuele II. The neoclassical soaring gallery is shaped like a crucifix and reminded me of a place Las Vegas tried to emulate. 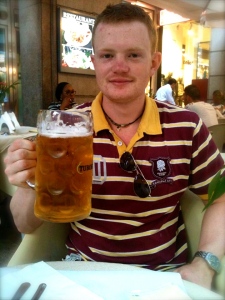 We looked at the famous opera house Teatro alls Scala from the outside then had some great cannelloni and massive beer jugs back on Vittorio Emanuele II. Back when I was 16 I had visited Italy on a college trip on 1-6 April 2006 and loved the liquor Limencello; I tried it again in Milan eight and a half years later and loathed it!

After a great day exploring we hopped back on the red subway at Duomo, changed to the blue line at Porta Venezia and then… spent 20 minutes talking and missed our stop. We ended up in the countryside miles from Milan at a dodgy looking station and had to wait 25 minutes for the last train back into the city. We very nearly got stuck there overnight! Oops…

On checkout the next morning at Hotel Ideale we were stung with by a €4 per person per night city tax that and never been communicated previously and amounted to €48. It was not the hotel’s policy and they and no choice as Milan city brought in the law on 1 September 2012, but it still felt pretty sneaky.

Having explored all of Milan we had hoped to see the previous day, we weren’t sure where else to head to kill time before our return flight to the UK. I found Giardini Pubblici in the guidebook and we headed there, having enjoyed Parco Sempione so much the previous day. 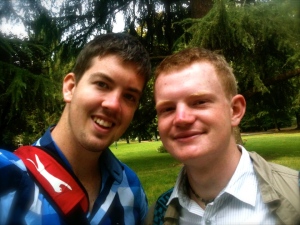 Giardini Pubblici was everything a city centre park should be – relaxed, shaded by trees, full of life and generally, well, pleasant. We found some turtles in a pond and the highlight of the holiday was telling Will to watch the one crawling on his foot and seeing him scream and jump a mile thinking I was being serious. These turtles were loving life though, swimming, mating, lounging on rocks, inching to the edge and then hurling themselves in the water. Man, I’d love to be a turtle.

We casually strolled down Corso Buenos Aires one last time (we had the big backpack with us) and took the subway back to Dateo. From there we got the Linate express bus back to the airport and hung out there until it was time to fly.

Milan is an awesome city. It may be one of the top ten most expensive cities in the world but as we discovered, there’s tons of brilliant free stuff to do, making it an affordable and thoroughly enjoyable destination.

2 thoughts on “How to do Milan in a day”