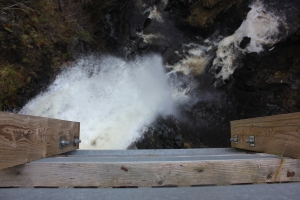 Glen Affric is a glorious region. The glen itself extends deep into the hills beyond Cannich but we were headed about five miles southwest to Plodda Falls, after a fantastic weekend snowboarding. I drove us along a sketchy gravel path reminiscent of our dodgy descent into Monument Valley, Utah in 2011, which was full of potholes. The journey was well worth it, though. The first waterfall was pretty but small; a long way to come for a few wet rocks, I thought. But then we rounded a corner, walked out over a restored Victorian wooden viewing platform and gazed down, over the most spectacular view of a waterfall I’ve ever seen.

Straight below me, as if I were on a diving board, a mighty torrent of water cascaded vertically with an awesome roar. All around were soaring trees including three great firs planted by Lord Gladstone in the 1880s. Gladstone actually had the river redirected to further increase the spectacle of Plodda Falls. 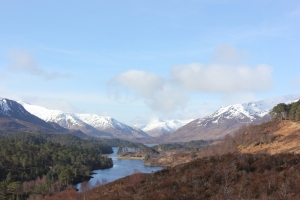 I drove back up the track before crossing the River Glass and driving around the north bank of Loch Beirin a’Mheadhain. Stunning views of the Loch smiled at us from either side all the way to River Affric, where we climbed the Am Meallan Viewpoint Trail for a classic picture postcard view of the glen to the mountains beyond. The landscape really reminded me of New Zealand’s North Island.

Further north we visited the Black Isle, which is a peninsula rather than an island. We had lunch at Fortrose and enjoyed great views of the bay.

I drove us all the way back to Wick in Caithness, the top corner of Scotland. Back in the day, this land was Viking-owned and is historically more connected with Shetland and Orkney than the rest of the mainland. 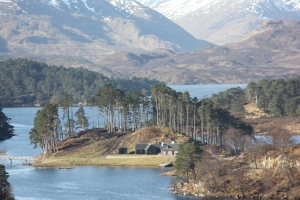 We spent the night in a delightful ‘wigwam’, a heated wooden tent larger than our pod in Cannich. We were effectively staying in the garden of a lovely local named Jenny, who runs Bower’s Wigwams. We couldn’t have asked for a nicer and more welcoming host. Jenny provided us with logs and kindling so we could have a campfire (which we cooked some tasty marshmallows on!) and eggs for breakfast.

Our first stop was Dunnet Head, the most northerly point on the mainland of Britain. For a few minutes I was the most northerly man in mainland Britain. Not quite on top of the world, but on top of the UK is a pretty good feeling. The views were stunning and the breeze sure blew the cobwebs away, but weather-wise we were blessed with the best day of the year so far (this was March 11th). Visibility was perfect, allowing crystal clear views of Orkney just over the water and magnificent cliffs of the bay leading round to Thurso. The size and shape of the bay and dramatic colour of the cliffs reminded me of St Ives Bay/Carbis Bay in Cornwall. The similarities between wither end of the UK are striking.

The most northern point of mainland UK!

We walked past the lighthouse built by Robert Louis Stevenson’s granddad to the 360 degree lookout, which is surrounded by wartime lookout buildings used during World War 2 to spot German U-boats. During a storm that must have been a miserable experience up there so remote for the young lads of the day. Apparently in the ‘60s, hippies moved into the area and allowed their kids to run around naked. The stark contrast between the two uses of the place is boggling.

We drove round to Thurso, perhaps the best surfing spot in the UK but the waves were sadly flat when we went. It’s a pretty village, but I preferred Dunnet for its quaint rural scenes.

Leaving Thurso en route to Durness we had no clue just how dramatic and memorable the road ahead was. 80 winding and breathtaking miles of coastal tarmac had more ‘wow’ moments than you’ll get on most of the UK’s roads put together.

The first notable landmark was more an ‘oh, that’s quite interesting’ moment than a ‘wow’ moment. We passed Dounreay nuclear power station, the first in the world to supply mains electricity.
As the green velvety bulbous hills met pristine sand beaches on the coast speeding by us, the photogenicity of our surroundings sky-rocketed. Bettyhill was our first stop and the walk through quaint fields to an idyllic sandy beach, complete with bubbling streams, creaky gates and dry stone walls, was too good to be true. Flagstone was exported from northern Scotland all over the world before cement was invented, apparently.

The beauty of Bettyhill belies the sad history of the place. Like many villages in the north of Scotland, this was a crofting community of resettled tenant farmers booted off their land at a time known simply as ‘the Clearances’. The King during the 19th century changed laws giving lairds the power to drive people from their homes to make way for sheep farming. Economic depression meant many had to flee to the cities, fuelling the industrial revolution. Driving through the region, we spotted countless ruins of cottages in desolate areas, a heartbreaking reminder of one of the darkest episodes of Scottish history. The fascinating, sad and inspiring history of this land is only matched by the extraordinary landscapes.

The Scottish coastline is terrific

Our next stop was Coldbackie, offering further turquoise seas, offshore islands and pristine, white sand beaches. Further round was Tongue, where the road crossed directly over the Kyle of Tongue. We stopped on the other side for lunch and drank in the stunning views of Ben Loyal and the majestic 14th century ruins of Castle Varrich.

Our journey continued west where we found the ruins of an eerie evocative cottage on the desolate moor north of Loch Hope. The road then wound its way up and down and around the stunning Loch Eriboll. Every twist in the road revealed another spectacular view of distant snowy mountains and lush waters in the foreground sparkling in the sun of a gorgeous spring day. It reminded me a lot of the west coast of New Zealand.

As we approached Durness, the landscape became ‘textbook rugged’, a term we agreed best described the wild cliff tops, lime-coloured waters and crumbling stone walls. Sangobeg beach was glorious and the reflection in the wet sand of the rocky outcrops and cliffs was sensational.

The Kyle of Tongue

We stopped at Smoo cave, which we accessed by walking down the beach and through an opening to a vast, dripping echo-et chamber: think stereotypical cave, think this place. We walked into a smaller flooded cavern with a dramatic underground waterfall crashing into it. Apparently the cave was inhabited around 6000 years ago. Legend has it that a man believing the cave to be occupied by the devil, sent his dog down to investigate.His dog returned looking petrified, confirming the devil’s presence. When the sunlight reached the cave, the devil knew he must leave, as he could only live in the dark. Furious, he smashed a huge hole in the cliff, creating the vast cavern seen today.

We had ‘the best hot chocolate in the world’ (actually I’d have to agree on that) at Cocoa Mountain before checking into Lazy Crofter Bunkhouse for the night. 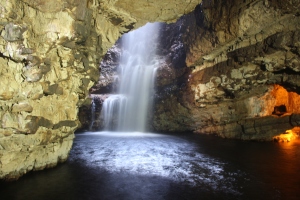 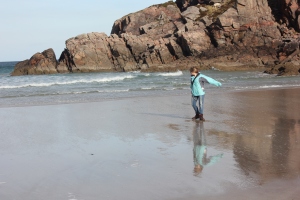 One of the best roads in the world

Around Durness is stunning