Following on from our epic USA road trip in 2011, my girlfriend and I are currently in Australia on an even bigger adventure travelling this incredible country. 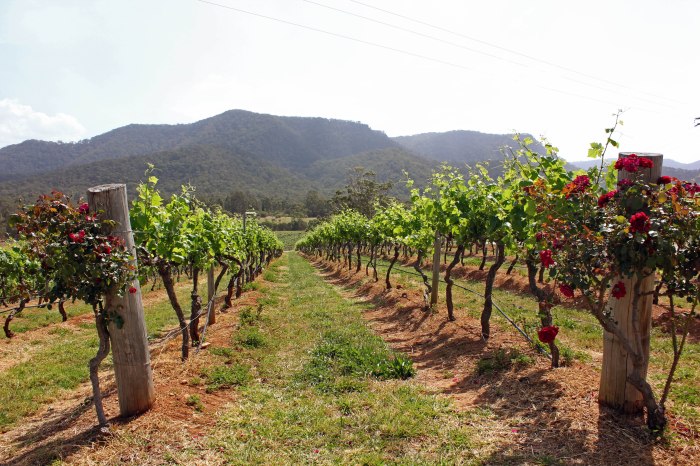 Whilst staying in Newcastle we visited the Hunter Valley winery region. We spent the day visiting several cellar doors and trying all manner of fine wines and local cheeses. The tastiest new discovery I made was that of the deceivingly un-crunchy “dukka”, essentially toasted seeds which can be eaten with olives and balsamic vinegar. Clearly I am not a food critic as the above description does not sound particularly exquisite but I assure you it was. I was less of a fan of the sparkling red wine we tried – call me a traditionalist but that just seemed wrong. The explanation for it was fascinating yet it escapes my memory. The great thing about a winery tasting tour is that you learn so much and promptly forget it all. 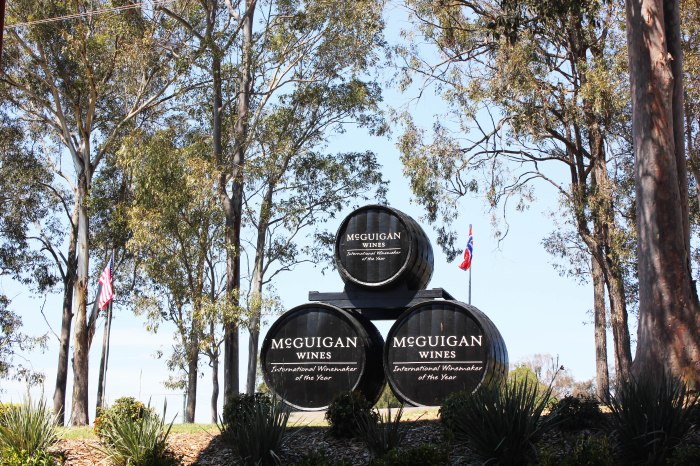 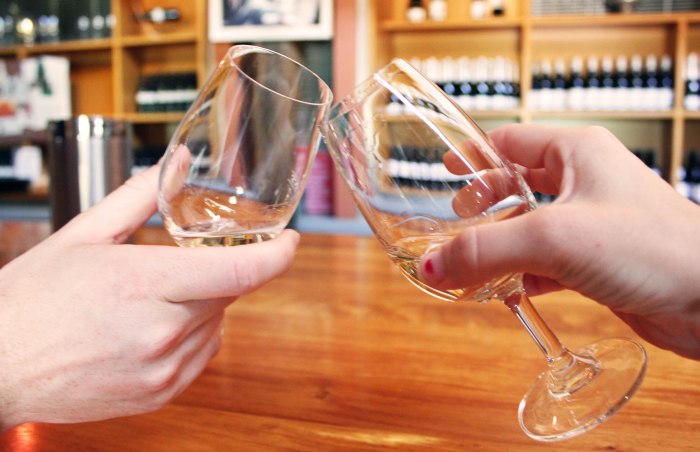 Newcastle itself did not seem particularly wonderful; the only thing of note was that it had the oldest ocean pools in Australia, which would have looked rubbish indoors but the rustic architecture sat well nestled amongst the rocks and crashing waves. Our next stop up the coast was the rather more charming Port Macquarie. A walk along the harbour front at Port takes one past hundreds of cute rocks all painted by locals and visitors marking their stay in the town. The friendliness of the town extended to the welcome we received from the staff at “Ozzie Pozzie’s” where we stayed. 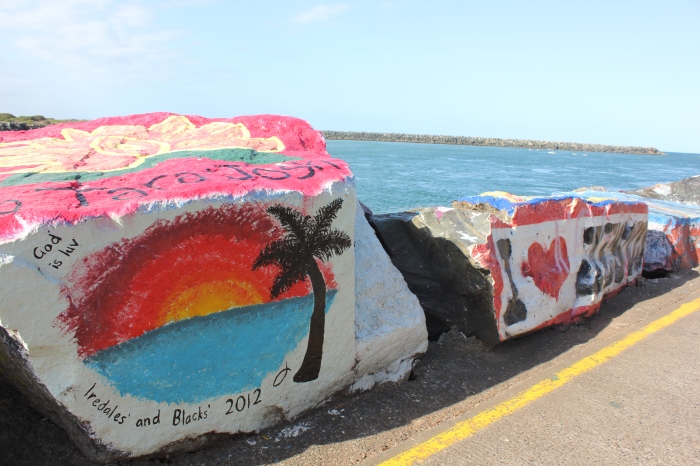 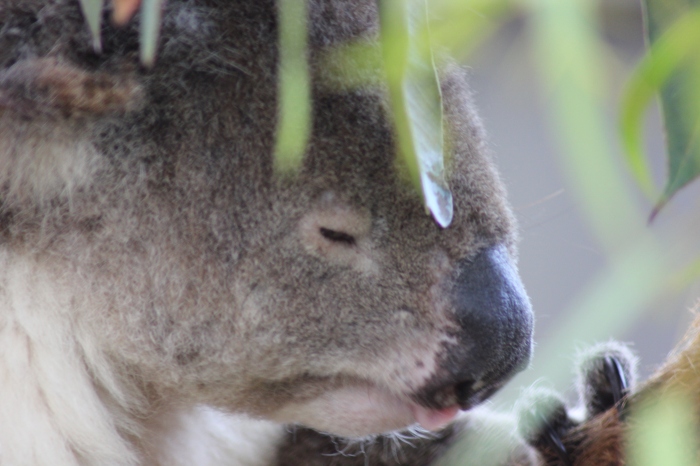 The best thing we did in Port was a kayak tour through the creeks and out to the harbour. Fortunately we were too far south to have to worry about crocodiles in the creeks, although a fish did terrify a few people by jumping into a girl’s kayak! We floated under the lowest of bridges where it was required to lie flat on one’s back and not think about the spiders brushing your face on the underside of the bridge, but it was worth it to reach trees inhabited by hundreds of flying foxes (bats). The cacophony was deafening, especially whenever an oar was banged against a kayak and startled the creatures. We headed back under the bridges and past cool iguana-like lizards on the banks known as water dragons. The paddle against the tide out to the harbour was a real workout but we were rewarded by the sight of two whales swimming past the harbour edge. Our wildlife adventure continued later that day when we visited Australia’s only koala sanctuary and had a cute tour, learning that a koala’s bum goes orange if it has chlamydia.

We decided to skip Coffs Harbour on account of only really wanting to see the “Big Banana”, a gimmicky café shaped like a, well, big banana. After an overnight coach ride we arrived at Byron Bay, the most easterly point of mainland Australia. We walked the whole of Byron Bay peninsula, from the rocks past Captain Cook’s lookout, up the cliffs to the lighthouse and back down through the rainforest to the beach. The town itself is a very cool surfer hotspot with great surf shops and infamous nightclub “Cheeky Monkeys” where the dance floor is quite literally on the tables. Our hostel had a great vibe, too, which was improved further when a possum ran down a tree branch hanging over the beer garden and sat chilling a couple of feet above everyone’s heads, without any modesty regarding its distractingly large hanging testicles. 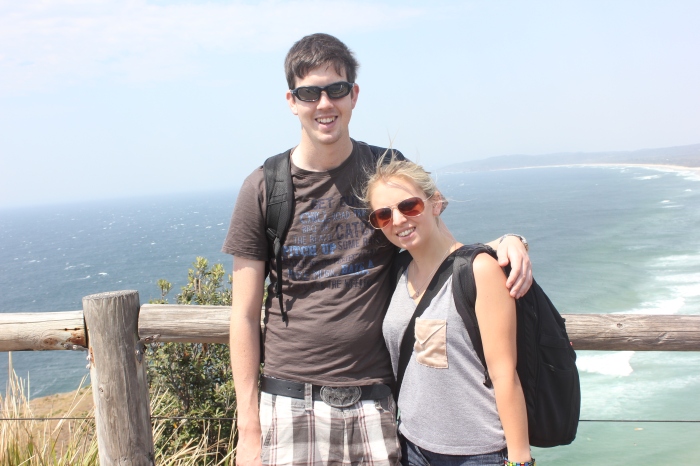 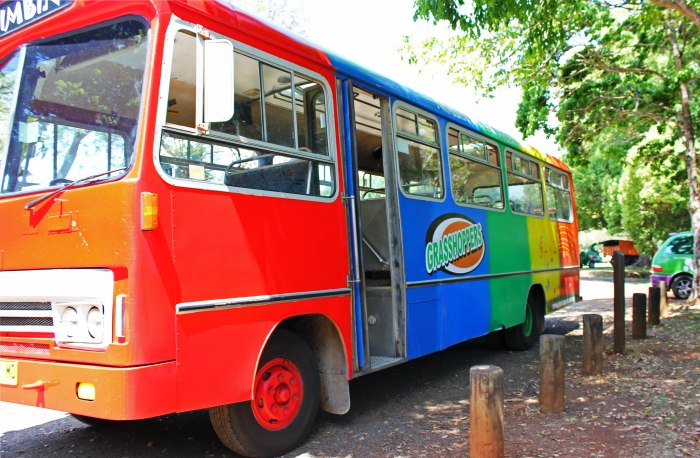 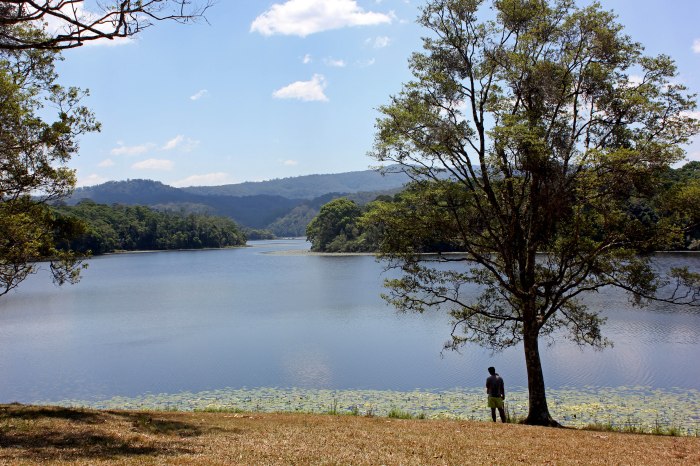 Surfers’ Paradise was the next stop in what was at this stage a rather brisk trip up the coast. The city is not in keeping with many of the other stops on the route and can best be described as the Gold Coast equivalent of Miami. The skyscrapers are impressive and the beach is windy (twice I sprinted to chase our runaway street map along the sand, much to the amusement of my girlfriend) but the lack of community and things to do is noticeable when one has come straight from Byron Bay. What the Gold Coast does have to offer, though, is perhaps the best selection of theme parks in the country. We chose to visit the water park “Wet ‘n’ Wild” on a rather chilly barely-spring day, meaning we would shiver but queues for rides would not be an issue. There is only one ride that will last long in the memory and that is “Aqualoop”. Just typing the words sends shivers down my spine as I recollect the vertical drop in the closed tube which gives you enough momentum to complete a vertical loop through a constant wall of white water. At least you hope it does – on the stairs ascending to the ride, there are signs explaining what to do should you be unlucky enough to get stuck halfway round the goodness knows how high loop. So by the time you are sealed into your own pod you are pretty damn nervous. Unlike any other ride I have experienced, you stand up without anything to sit in or lie in, with only a foam pad strapped to your back to prevent you burning off a layer of skin as you scrape against the wall during free fall. A five second countdown is played into the chamber and just to add to the tension, the guy messed ours up and the countdown had to restart. When it finally reached zero, the floor literally vanished from beneath my feet and I began to free fall for a terrifying god knows how many feet. After the massive drop I hit a wall of water and all vision was obscured for the duration of the loop the loop. All I remember feeling was a sense of relief when my eardrum balance operations centre sent a memo to my brain to tell me that we were now heading downwards again and had successfully completed the loop. My brain was grateful to my ears for this message, especially given that my eyes were out of action, and my brain promptly told my mouth to whoop for joy to celebrate. This was not a good call and I ended up swallowing most of the water in front of me, although even this did not clear enough water directly in front of me to help me to regain sight. Like many things I would come to do in Australia, it was an experience I am glad to have had but will not be in a rush to repeat… 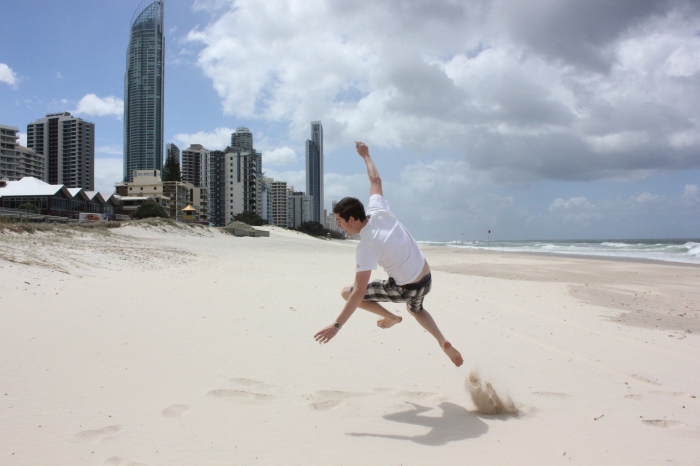 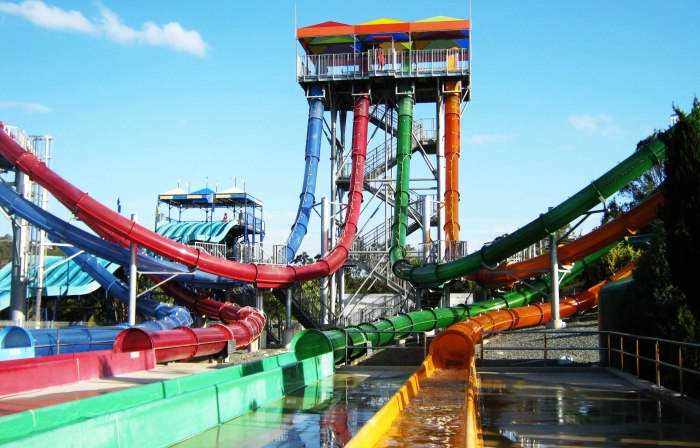 Next time, turkeys in Brisbane and learning to drive on sand…

3 thoughts on “East Coast Australia 2 – Up The Coast”