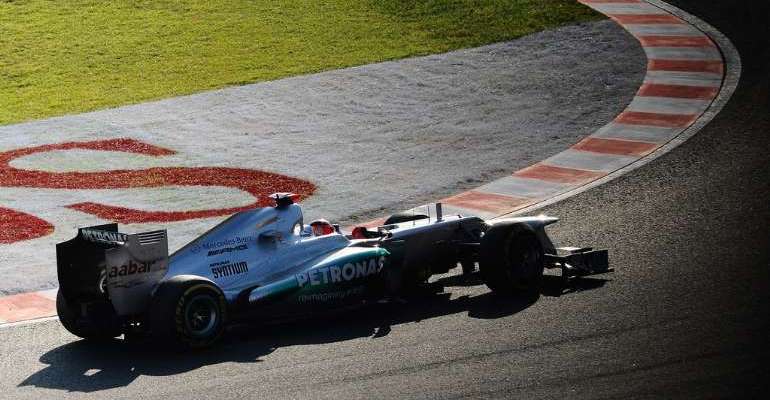 The world and his dog are writing reviews of the 2012 season right now so I thought I would look back in a different way. Whilst the major new Formula One technical regulations bringing in new engines do not kick in until 2014, the end of the 2012 season marks the end of a particular era of stability in the sport in other areas. At the start of the 2010 season, the drivers of the top teams shuffled and aligned themselves into a configuration which has been largely unchanged for three years. We also saw a rehaul of the points system at the start of 2010 from the 2003-2009 system of 10-8-6-5-4-3-2-1 to the current 25-18-15-12-10-8-6-4-2-1 system. Three new teams joined the championship and since the start of 2010, five drivers have won all but three of 58 races. Incidentally, it has also been a period of generally fantastic racing compared to the decade or so that preceded it. In fact, thanks to the reintroduction of KERS and introduction of DRS in 2011, we have seen some of the best racing ever lately.

For the last three seasons we have had Sebastien Vettel and Mark Webber at Red Bull, Lewis Hamilton and Jenson Button at McLaren, Fernando Alonso and Felipe Massa at Ferrari, and Nico Rosberg and Michael Schumacher at Mercedes. The only other team that has regularly been near the podium for any period during the last three years is the Enstone based team now known as Lotus (formerly Renault). Next year, the driver and team alignments change significantly for the first time since 2010, so it seems like a good time to reflect on three seasons of great racing. Lewis moves to Mercedes, Michael retires, Sergio Perez joins Button at McLaren. After much deliberation, Ferrari are retaining Felipe as Alonso’s rear gunner after his much improved perfomances at the tail end of the 2012 season whilst Red Bull keep the same driver line up, as they did going into the 2010 season unlike any other top team.

The five drivers that have dominated the last three years are Webber, Alonso, Vettel, Hamilton and Button. This decade so far, Webber is on seven wins, Button on eight, Alonso on nine (despite being in contention for the championship at the final round twice in the last three years), Hamilton on 10 and Vettel on a colossal 21. Rosberg, Pastor Maldonado and Kimi Raikkonen have each been victorious once this year but it really has been a five horse race for much of the time (when Sebastien was not dominating anyway).

Red Bull are obviously leading the way in team wins on 28, ahead of McLaren on 18, Ferrari on nine and Mercedes, Williams and Lotus each on one.

Amazingly, in the last three years no one has managed to win the same Grands Prix three times. Vettel managed to win this year’s championship without winning a race in Europe, the first driver ever to do so.

Without a doubt the best race of the last three years was the 2011 Canadian Grand Prix. It will go down in history as the longest ever Grand Prix, clocking in at a little over four hours, including a two hour stoppage and five safety cars. Since then, the rules have been changed so that no Grand Prix can ever exceed a total time of four hours.

But the real reason it will be remembered is for Jenson Button’s famous victory, snatching the lead from Vettel on the final lap as the German slid wide in the wet conditions. Button pitted five times and had a drive through penalty and describes this as the best win of his career. BBC F1 commentator Martin Brundle said: “At one point, we were wondering if Button would catch the Hispanias before the race restarted under the safety car and now he’s won the race!”

One of the most dramatic races ever began under safety car conditions as it was raining and the drivers had no experience really of Pirellis in wet conditions. The race properly began on lap six and Vettel was challenged by Alonso, before pulling away. Hamilton collided with Webber and rejoined behind Button, closing on his team mate at the final chicane. Button made a slight mistake and Lewis tried to make a move down the main straight. In the mist, Lewis was unsighted by Jenson and the pair touched in a racing incident. The safety car came out due to the debris, Hamilton retired and Button was the first leading driver to pit for intermediates. On lap 13, the race restarted and Button was soon the quickest driver on the track. Half the field followed suit, including Alonso, before the rain became torrential and the safety car was back out on lap 20. On lap 25 the red flag was thrown. Two hours and five minutes later (a period longer than 95% of Grands Prix) the safety car led the field back out, before pulling in on lap 34. The track surface had dried out significantly under the safety car and almost immediately drivers were heading for the pits for inters.

Button was the cause of the safety car yet again on lap 37 when he collided with Ferrari’s Fernando Alonso, putting the Spaniard out of the race. Jenson was last at the restart but began fighting his way through the field thanks to some nicely timed stops for inters and subsequently dry tyres. He was fourth behind leader Vettel, Schumacher and Webber when with 12 laps to go Renault’s Nick Heildfeld and Sauber’s Kamui Kobayashi crashed and brought the safety car back out. Webber had brought himself back into contention by being the first leading driver to pit for slicks.

Two laps later the race restarted and whilst Schumacher, Webber and Button battled for second, Vettel began to pull away again. Webber made a mistake at the chicane on lap 64 and dropped back to fourth. Next lap, Button nailed Schumacher and set about after leader Vettel, who was three seconds up the road. Vettel had led every lap of the race so far and was a second ahead on the final lap. He made an error (his first of the season so far) and half spun at turn six after touching the white line. It was enough for Jenson to slide through and take a famous victory.

There have only been two but Abu Dhabi 2010 was a drawn out chess match famously lost by Ferrari, whilst Interlagos 2012 was more captivating from start to finish than perhaps any other showdown ever, despite not having the dramatic conclusion of Brazil 2008. My blog last week includes a full description of all the drama.

Korea and India are not bad tracks – Korea was spectacular for the fans in the 2010 rain despite barely being finished, whilst India is already a firm drivers’ favourite despite producing fairly dull racing thus far. But the Circuit of the Americas in Austin, Texas is a class apart. In one weekend, it brought Formula One right back to the fans in a crucial market and felt like the perfect home for the sport in the USA. Most circuits take years to feel like they truly belong on the calendar but something about Texas felt just right for F1, especially with those brilliant Pirelli cowboy hats worn by Lewis Hamilton and co on the podium.