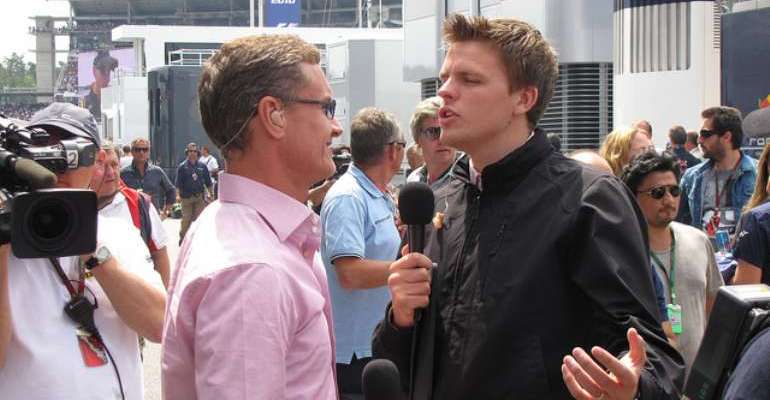 Following on from Part 2, here are some more fantastic of the BBC’s greatest scene-setting videos from the last three years. It would be too much to include every hilarious clip of Eddie Jordan getting thrown in the Red Bull “float-a-home” at Monaco so I’ve stuck to just evocative and spine-tingling adrenaline-fuelled montages that the Beeb have carefully put together like no one else could to capture why we love the sport so much.

Eddie Jordan’s epic poetry narration returned at the end of 2010 over the beautiful “The Boathouse”, John Murphy’s The Last House on the Left soundtrack.

It sounds almost Shakespearian to begin with, “Out of the silent winter a familiar sound grew, distant at first but then louder. And with an explosion of noise and sound the circus blew into the sands of Bahrain: the race was on.” The rest of the poem speaks for itself, describing Red Bull and Ferrari before juxtaposing Hamilton and Button as “Two champions in one team with different styles: one full of flair and on the edge, the other calm and methodical, both keen to add another crown – both at times still revelled in the acclaim of the crowd.” The description of Schumacher shows Jordan’s feelings towards the German star back in 2010: “How another man, an ageing and fading star, would have loved to have been riding his old chariot. Once untouchable he had forgotten the most important rule: always leave them wanting more.“ This is simply a vast and ambitious piece which successfully captures the excitement of the 2010 season finale even better than the 2009 astrology star based season summary.

Arguably, the poetry piece Jordan did which introduced the 2011 season is even better, but this one came first and the two are very similar. At the start of 2011, EJ perfectly captures the emotions of not wanting to let go and move on from a spectacular 2010 season and it genuinely feels like a break up. Again he talks of Michael Schumacher as a “falling God now railing against his own mortality, and risking that of others”. It is hard to believe Jordan himself actually wrote of how “friends, rivals, team mates blurred into one, and in that way madness lies”, but apparently he did. It is the end, though, which is actually inspirational. As the drama on screen fades to a focussed Sebastien Vettel, Eddie’s gritty Irish voice echoes “but what do you do when the ride is over, the greatest ride, the ride of a lifetime? You strap yourself in. You get back on. And this ride begins once more.” It is actually haunting and it’s good to know Jordan can do one thing right, even if it is poetry.

To have the introduction to a sporting event in a foreign language with subtitles is almost ludicrous. Surely it’s a well documented fact that viewers will switch off if forced to read what they are hearing before the programme has even begun? Well, the BBC proved that theory wrong in devastating fashion in their introduction to Monza last September. The stunning images more than grab your attention, anyway. The deliberately over-saturated colours on a beautiful Italian landscape vista are quickly followed by the interior of a church and the famous Pantheon of Rome. But like all good BBC F1 videos, these are only noticed on the fourth or fifth watch – so much is crammed into these videos in the blink of an eye. The Roman centurions holding the flags, for instance, are gone as quickly as you have read the translation that Italians are aware of other nations and their heritages. Again, the colouring is sublime as the camera flicks across framed photographs of British racing car teams. Even when showing still images, the movement is always there in these videos. The brief clips and echoing laughter of school children fits nicely with the lullaby music underneath and excellent sound production when split by shots of Formula 1 action, slowed down and given added sound effects when cars crash into barriers heavily. The “mysteries of power-weight ratios” are nicely compared fleetingly to Da Vinci’s art in a piece that encapsulates Italy’s tradition and passion all at once. The cogs pictured with statues from Rome are also a well-thought out addition. The video then turns its attention to “Fey-rrari” and you find yourself actually repeating the Italian narrator. All of a sudden the choice of an Italian speaking narrator makes perfect sense and the whole thing feels wonderfully evocative. It makes you want to be Italian, “Do you have a little Italian in your soul?” and welcomes you to be part of their tradition. Yet another way that the BBC just dares to be different and succeeds yet again.

As soon as you see that it’s been exported to 2.35 widescreen aspect ratio format, you know this one is going to be big. Labelled as “The Indispensables”, this feels like the video the BBC had been threatening to make for a while. They make no bones about trying to be Hollywood-esque, with a proper American deep-voiced narrator and the obligatory green screen “This following preview has been approved for American audiences” at the start. But it’s the sound production, as usual with these videos, that hits you hardest. Except this time it’s a vaster soundscape than ever before. It just feels… epic. The heavy bass beats and slow motion, gorgeous shots of city sirens, cars, lights, glitz and glamour are sexy even before the deep-voiced American chimes in with “This weekend…” Again, the colouring is sublime and it just feels blockbuster-y. Yes it is a bit silly but they even do silly well, for goodness’ sake.